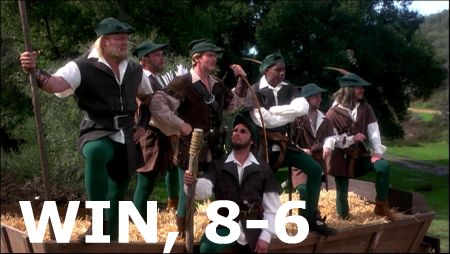 Earlier today, Andy Martino of the Daily News pondered "[Chris] Carter can hit, but can he pinch-hit?" That question was answered tonight, as Carter hit a go-ahead, pinch-hit RBI double in the 8th inning. It was a dream debut for man known as "The Animal", as he spurred the Mets to their most memorable victory so far this season. The lineup pounded out six runs on six hits in the 8th, and Frankie Rodriguez sent down the Nats 1-2-3 in the 9th to complete the comeback from down 6-1. Ike Davis made his third outstanding dugout catch of the season to seal it, linked here.

Carter has a great look -- he could be mistaken for an extra from Saving Private Ryan. This smashing entrance should make him a quick fan favorite, and hopefully earn him some more playing time. Jeff Francoeur is hitting just .209/.290/.419 vs. right-handed pitching. The Animal has historically hit better against righties than lefties. Perhaps he could get some work in? Like tomorrow, vs. righty Craig Stammen.

Some other game notes in lazy bullet-point format:

The Mets will try to win the rubber game tomorrow at 1:10. Mike Pelfrey starts for the good guys.

"Great roasted malt character and beautiful deep copper color. Great hop flavor and aroma. A tad bit weak on the bitterness for my taste, but I’ve not yet found a beer that satisfies my craving for hops. Minimal head with some lacing. A fine IPA, and possibly a new favorite for me."-- RateBeer User Review

All Mets fans had seen this movie before
Sure they'd get hits; then fail to score
But down in the eighth, Mets found attack
Hit after hit, they came all the way back
And who gets the hit that gives them the lead?
The Animal, finally here to fill their bench need
Ike ends the game with a catch acrobatic
No shock; while somersaulting he's automatic 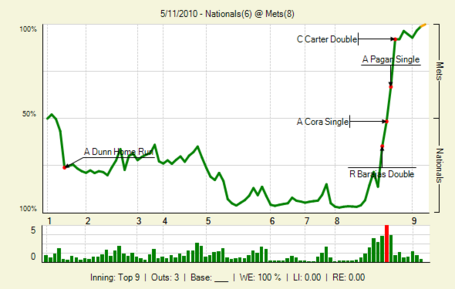