Marlins 2, Mets 1: At Least It Was Quick

Share All sharing options for: Marlins 2, Mets 1: At Least It Was Quick

If you like short games and pitcher's duels, tonight's game was for you. If you like offense and intelligent game management you might want to delete this one from the DVR. After just 2.5 hours of baseball, Fernando Nieve uncorked a wild pitch in the bottom of the 9th inning and Cody Ross scampered home from 3rd base to end it.

Let's cover the main positive from this game -- Johan Santana. The man was terrific, going seven innings, allowing one run with five strikeouts and no unintentional walks. He also induced a staggering 19 swinging strikes out of 98 pitches, on the strength of an effective changeup. It was vintage Johan, and by vintage I mean circa 2008. Hanley Ramirez joined the Phillies' bullpen coach in the binoculars club, but it didn't do any good vs. Johan tonight (picture via urbanchaos): 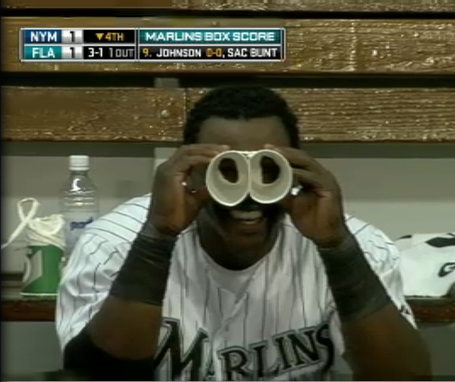 Now on to the negatives. Marlins ace Josh Johnson was dominant, striking out seven and walking none in his seven innings of work. Mets hitters were hapless and days off for Jose Reyes, David Wright and/or Jason Bay might be in order. Reyes in particular hasn't looked right. It's approaching the point in the season where the "he had no spring training" explanation isn't enough. He did make a couple nifty plays in the field though, a reassuring sign that his legs are returning.

Jeff Francoeur produced another 0-fer, and now has a slash line of .230/.295/.393. He's like that affable obese friend who has spent a lifetime eating fast food, then goes on a two week crash diet in an attempt to change his ways. Everyone around him is excited and supportive, happy that the all-around good guy is getting his act together. Then one day you drive by Wendy's, see him sitting in the front window with three Baconators and realize it's just not meant to be. Yes, Frenchy has loads of potential but after 3,000+ plate appearances actual results are expected. I called on my friend, chaotician/sabermetrician Ian Malcolm, to provide his high level assessment of Francoeur: 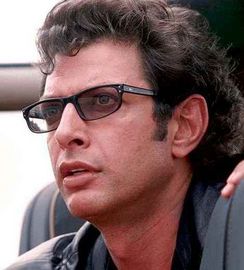 This is not some prospect who was given a raw deal by Jerry Manuel or the victim of BABIP-induced terrible luck. Jeff Francoeur, uh, has had his shot, and he's just not a major league caliber starting right fielder.

No, this isn't bashing Francoeur the human being. He's doing the best he can, and with a smile on his face. My problem is the golden boy treatment he received from the mainstream media and fans over the last nine months or so. This was a tremendous question mark of a player, yet based on coverage by those who can reach the masses you'd think he was a consistent All Star. To review: Frenchy the teammate = good; unreasonable praise of Frenchy the ballplayer = bad. He could be a useful piece, if deployed correctly in a bench or platoon role. Let's move on to the Jerry Manuel portion of the recap.

In Wednesday's game vs. the Nationals, Jerry called for three batter Reyes to drop down a sac bunt in the late innings with the score tied. Reyes couldn't execute and ended up grounding into a double play. This was a dumb decision by Jerry, as previously recapped. Fast forward to this game, with none out in the 9th inning and Luis Castillo standing on 2nd base after a Brian Barden throwing error. Jerry had a chance to "redeem" himself, by letting three batter Reyes swing away to try to break the 1-1 tie. But the man is stubborn, and once again signaled bunt. Reyes fell behind in the count 0-2 after ill-fated sacrifice attempts and eventually flew out. Bay and Wright failed to drive in Castillo, and the game was over maybe 15 minutes later. Having your three batter attempt a sac bunt is unconscionably stupid. Think your three batter is struggling and therefore the bunt is a good play? Move him down in the lineup. Sit him down for a couple games to get right. Don't force him to bunt. Unfortunately, those charged with asking Jerry about his decisions don't seem to understand how bad a manager he is:

A lot of people have defended Kevin and his opinions in the past with the justification that it's not his job to provide analysis. That may be true, but he is also present at Jerry's postgame press conferences where those in attendance can ask tough questions. And it's pretty obvious those questions aren't being asked. Kevin's first question to Jerry the other night was something like "Jerry, tell us about the little things Alex Cora is doing to help this team." C'mon now! This manager is using Fernando Nieve almost literally every day, bunting nonsensically and batting the team's best hitter 5th in the order. There's probably a happy medium between Burkhardt's softballs and my vitriol, and hopefully some of the beat writers can find it.

"Sailor Jerry spiced rum is the kick in the ass that every rum drinker needs to get out of the boring rum cycle that many of us have come to know. Sailor Jerry is here to make companies like Bacardi and Captain Morgan up their rum game. Who says change is a bad thing? This affordable, flavorful, 92-proof beauty of a rum shouldn't be overlooked." - BoozeBasher review

Johan dominates, to no avail
Thanks to massive hitting, managing fail
See, there's not a rally Jerry can't stunt
By simply asking Jose to bunt
Nieve's usage is unmatched
Astonished his arm's still attached
Mets lose one on a wild pitch
While fans dream of a skipper switch 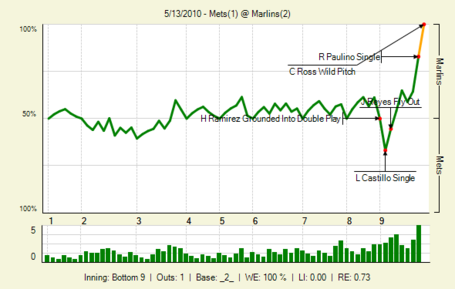