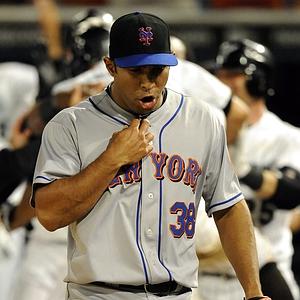 Jerry Manuel is using one of the Mets' worst relief pitchers as his go-to setup man. Oh, Jerry.

Fernando Nieve has a 3.54 ERA this year, and to no surprise, that's surely enough evidence for Jerry Manuel to believe he is good enough to be the setup man. When you delve deeper into Fernando's numbers this year -- and granted I know we are dealing with fairly small sample sizes so far -- you really see that Nieve has been quite lucky rather than good. And in this case, I don't think its 'better to be lucky than good', at least not over the long haul.

Nieve is walking over 5 batters per 9 innings; that's terrible. You might be able to get away with a walk rate that high when you strike hitters out at a high rate (hello, Francisco Rodriguez) and/or get a good amount of groundballs; Fernando Nieve really doesn't do either of those things -- his strikeout rate is a poor 6.2 K/9, his swinging strike% is a below average 6.8%, and his groundball rate, while not terrible, is under 50%. To no surprise, these peripherals spit out an ugly 5.05 FIP and an even uglier bullpen-worst (minimum 10 IP) 5.25 xFIP. What might be most disturbing is Jerry's ridiculous use (actually, its 'over-use', but that's whole different subject) of Nieve -- his pLI is a bullpen-high 1.62, higher than closer Francisco Rodriguez.

So then the casual fan probably wonders, well why is Nieve's ERA only 3.54 if his peripherals are so bad? Well, this is the part where Nieve has been very lucky -- his BABIP is only .202. The hits are just not falling in against him right now, so hes getting away with walking a ton of batters; but that surely won't continue, not with his O-Swing% right around average and the failure to miss bats. Fernando Rodney is a good example of a pitcher going through the same thing -- his strikeout and walk rates are terrible, though at least Rodney has gotten groundballs at a higher rate (nearly 60%), but his ERA is only 2.70 thanks to a BABIP under .200.

When Ryota Igarashi returns, the Mets will rightfully send Manny Acosta packing back to Buffalo, but if Fernando Nieve keeps walking hitters at such a high rate while not missing many bats or getting a ton of groundballs, the Mets are going to have to give strong thought to designating him for assignment, or at the very least, taking him out of so many high leverage situations. The 3.54 ERA will only last for so long.