OK we've waited long enough, the Star of the Night (and the season for that matter) is SS Wilmer Flores.  The kid is absolutely on fire right now and really hasn't missed a beat since the beginning of April.  Some questions about his glove (8 errors already) but few people expect him to stick at short anyway.  The fact of the matter is, he's got a truly special bat.  The kid leads the Sally in OPS and the other 4 guys in the top 5 are all between 2 and 4 years older than him.  Just for good measure he leads the circuit in batting as well.  To answer Gina'a question from yesterday's report, considering that Ike, Mejia & Niese are in the majors and Fernando just succumbed to his second injury of the campaign, I'd say Wilmer is well on his way to becoming the Mets' #1 prospect.

Goat of the Night: Take the night off Clint and Alonzo, tonight's goat is the entire B-Mets offense.  Not because they were shut out on a one-hitter tonight, not even because they've scored only 7 runs in their last 4 games, but mostly because they wasted that great performance by Dylan Owen who really tried to keep them in the game.

Like Binghamton, Buffalo figures to be much better this season because frankly, it's really hard to be as bad as their horrible 56-87 team last year.  After 2009's injuries shone a spotlight on the absolute dearth of not just prospects-in-waiting but even just serviceable replacements on call in the minors, there was a clear focus by the Mets front office in the offseason to stockpile any and all available/cheap talent they could find in Buffalo.  Enter early favorites Mike Hessman, R.A. Dickey & Jason Pridie.  Beyond that, the ascension of a handful of top-tier prospects (Fernando, Thole & Tejada) as well as interesting supporting guys like Dillon Gee, Pat Misch and Bobby Parnell promise to, at the very least, take the Bisons back to respectability.

In the last week Buffalo has gone 4-3, made possible by a 3-game win streak following a 3-game losing streak (deja vu).  Overall, the Bisons are 20-15 which is third in the International League, but only 1.5 games back from front-running Syracuse.  Some notes from the first month of the season around Coca-Cola Field: 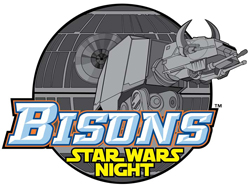