An Inning With Cow-Bell Man

Share All sharing options for: An Inning With Cow-Bell Man 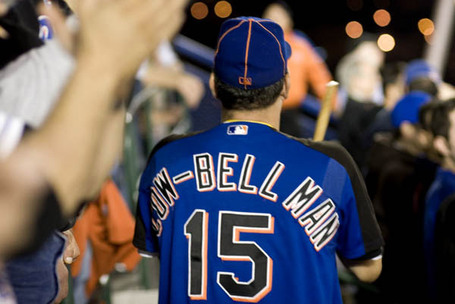 Amidst all of the great storylines from last Tuesday's exciting comeback win against Washington, the highlight of my night was the chance to spend an inning with Cow-Bell Man.  That's right, the Cow-Bell Man that we've all come to know and love, who we've seen (and heard) rooting on the Mets and their fans seemingly as long as we can remember.

He graciously agreed to sit down with me and answer some of the questions I'd wondered about him ever since I first started visiting Shea as a kid, and then share his responses with all of you.  So the following is the word-for-word recording of our chat.  Enjoy:

Me:  Do you mind if I ask your name and age?

Cow-Bell Man:  My name is Eddie, Eddie the Cow-Bell Man.  My age is a secret. (laughs)

Ok so my first question is when did you become a Mets fan?

Almost from the start, so did you grow up around here then?

Really? So how come the Mets, not the Yankees?

CBM:  I've been a National League fan most of my life.  My father was a big Brooklyn Dodger fan who became a Mets fan after they left.  I can still remember he took me to my first Met game April 21, 1964.  I've been coming back ever since.

How and when did you become Cow-Bell Man?

CBM:  I became Cow-Bell Man in 1995.  One day, I happened to bring my cowbell to the stadium as a noisemaker.  It seemed like a natural fit during the rendition of 'Let's Go Mets' on the Diamond Vision so I kept hitting it whenever they did the 'Let's Go Mets' chant and the more I did it, the more the people around me applauded and cheered.  They loved it from there on and I wanted to spread that around.

CBM:  Well first the cowbell has a very distinct sound that really carries.  But it also has that Latin tradition and throughout their history the Mets have always had a lot of Latinos, on the field and in the stands.  I just felt it was a perfect fit and people took to it so well that it's become a fixture.

I've always wondered this one because I always see you here when I come, when did you last miss a game?

CBM:  The last home game that I missed was seven years ago, during the 2004 season due to an illness in the family.

Oh wow so you've seen a lot of Mets history.  So what was your favorite game?

CBM:  Wow. (pause)  The '86 World Series has to be number one, you know?  Game 6, of course.  I won't lie to you, I didn't think they were gonna win it especially after two were out and nobody was on.  But I wasn't the only one!  You didn't either!

Well I was only 1yr old at the time.  (laughs)  But you're right, even I didn't think they'd pull it out!

CBM:  But when they did come back that night, I knew they'd finish it off.  Definitely my best moments back at Shea.

Ok now for the bad times, what was your worst Mets game?

CBM:  Definitely losing to the Yankees in 2000.  Tough watching them celebrate a World Series on our field.  That one or losing Game 7 of the 2006 NLCS against the Cardinals.

Tell me about it, I was in the Picnic Area that night.

CBM:  So you had a great view for Endy's catch then! (laughs)  I was back a few rows behind first base that night, actually I was sitting with the sign lady who was always down there.  She was one of the old-timers that unfortunately doesn't come around here anymore.

Ok that brings me to an interesting question, Citi Field or Shea Stadium?

CBW:  I hate to say it but I liked Shea better.  This is a beautiful new stadium we have here don't get me wrong, but the thing about Shea was that people were just more into the game there than they are here.  At Citi Field now, it feels like people are more into walking around, getting all the food, checking out the clubs than watching the games.  Even at the best games, the Yankees games, the Phillies games, when the place is sold out, you look around and there are lots of empty seats because people are out and about.  Sometimes it feels more like a tourist attraction.

Yeah Citi Field has a whole lot to offer, are there any parts about it that you really like?

CBM:  Definitely, this area where we're sitting here, the Pepsi Porch.  It's a really fun area because every seat up here gives you a great view of the game and the rest of the stadium too, especially these front rows.  Very good for rooting everybody on.

CBW:  Wow.  Now that's a tough one. (pause)  I can't pick one but growing up, my first favorite was Ed Kranepool.  I also really liked Jerry Grote and I absolutely loved Cleon Jones.  Later on I really liked Mike Piazza and I liked Al Leiter, people forget how good he was for us.

CBW:  Even though he's hurt right now that's Carlos Beltran.  He can do so many things.

One of my favorites too.  How about your least favorite Mets?

Easy, Bobby Bonilla.  The fact of the matter was, at the time, he was the type of ballplayer that Mets fans didn't like.  He didn't go all out for us and he just had a different style about him that people didn't like.  He just dogged it too much.

Do you ever travel to see the Mets on the road?

CBM:  Oh yeah, I go to Atlanta, I go to Philadelphia, I go to Florida.  Spent the weekend in Fenway a couple years ago.  And of course across town in the Bronx.  I think I'll be in Washington this year.

Cool us too, maybe I'll catch up with you there.  How do the road crowds treat you?

CBW:  Well it depends.  Some are really good, some not so much.  Philadelphia is the worst.  Philadelphia...they're animals over there.  Total animals.  It's a jungle over there.  I do that one every year and luckily there are usually lots of Mets fans there too.

Ok last question, do you think you'll ever quit being Cow-Bell Man?

CBM:  Well the day I wake up and I can't do it anymore is the day I quit.  But you know what?  It's been a blast for me doing this and it's all about the people.  The people here, they enjoy it; the adults enjoy it, the kids enjoy it.  I just love to see the smile on peoples' faces.  And as long as they keep smiling and enjoying it, that's how long I'm going to keep doing it.

Well just so you know, personally I absolutely love it and I hope to see you here for years and years to come.  Thanks so much for sitting and talking with me, it's been great.

CBM:  No problem, thank you.

Of course I could have spent the whole night sitting there asking him a thousand more questions and listening to him talk about all of his experiences with the Mets but he's got a job to do after all, so just like that he was off to pump up the crowd. 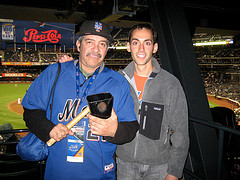 So I hope you guys all enjoyed this as much as I did.  It was a really interesting experience to hear what he had to say, because he's seen it all and even though we see him all the time at the stadium, we've never really heard his story.  He's just such the epitome of what's great about Mets fans.  And beyond that, he's just a genuinely nice guy; as warm and welcoming as you hope he would be, if not more so.  So when you see him at your next game, be sure to give him a wave and a cheer because he'll certainly say hello, snap a couple photos with you or even just give you a couple knocks on the cowbell in return.  And because I told him to look for the story here this week, let me say thanks once again to Cow-Bell Man for letting me do this, hopefully we can chat again soon!