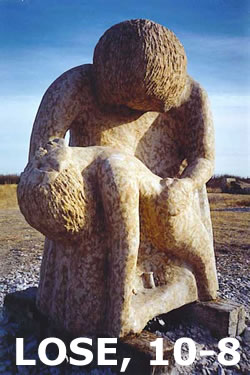 The only thing keeping this game from being an unmitigated catastrophe was the late-inning eight run explosion from the lineup. Otherwise, this one had a very 2009 feel. There was an injury (Jon Niese hurt his hammy), laugh-out-loud worthy defense (David Wright in the 3rd inning), embarrassing decision-making by Jerry Manuel (high leverage use of Fernando Nieve; pinch-hitting Jeff Francoeur for Chris Carter) and some good old fashioned bad luck (multiple double plays on well-struck balls).

Niese pulled himself from the game in the 3rd after throwing a pitch to Hanley Ramirez. On the prior play, he fielded a bunt awkwardly, tweaking his right hamstring. This is the same hamstring he injured last summer. The good news is that this injury appears far less severe, and Adam Rubin reports there's a chance he won't miss his next start, scheduled for Friday night against the Yankees. If he does, replacement options include Hisanori Takahashi, R.A. Dickey, Pat Misch and Raul Valdes.

The Marlins put six runs on the board in that 3rd inning, and Wright deserves much of the blame. He was charged with one official error but deserved at least one other. His new Roger Dorn-esque approach to fielding ground balls is disconcerting. The deficit rose to seven runs after a Dan Uggla homer in the 5th. The Mets didn't mail it in though, as they closed the gap to 7-6 after scoring three runs in both the 6th and 7th. Carter drove in the first run with an opposite field single and had some nice cuts in his two earlier at-bats. So when he came up in the 7th with the tying run on 2nd base, there was reason for optimism. The sight of pinch-hitter Francoeur in the batter's box instantly squashed that optimism. Jerry batted Carter cleanup today, yet when lefty pitcher Dan Meyer was brought in to face The Animal, Jerry made the call to Frenchy. It's having three hitter Jose Reyes bunt all over again. If you bat a player cleanup, you don't take him out because of a perceived lefty vs. lefty disadvantage. Nevermind that Carter doesn't have a drastic platoon split. Nevermind that Meyer is actually worse vs. lefties. It's classic Jerryball. Carter is one of the few enjoyable things about the Mets right now, so this move was borderline infuriating. Give the guy a chance! Also, maybe I'm obsessed with Inglourious Basterds, but whenever I see Carter I think of this:

If Carter didn't already have the Hulk Hogan theme as his at-bat music I'd recommend this Hugo Stiglitz "Slaughter" riff. Oh, and Francoeur, the most beloved character since Mercutio, predictably popped out on the 2nd pitch he saw.

Speaking of Jerryball, Nieve was once again used in a high leverage spot. He served up a meatball to Chris Coghlan, who deposited the offering about 430 feet away in center field. This put the Marlins up 10-6, effectively ending the game. Nieve isn't good, yet Jerry uses him like a relief ace. Omar Minaya is making a surprise trip to be with the team in Atlanta. A lot of people will be calling for Jerry's head. Firing Jerry would be nice because he's bad at his job, but Omar really shouldn't be allowed to axe his second manager. Rearranging the deck chairs, as they say.

One last note -- it was a day of regression to the mean for GMJ and Alex Cora. They went a combined 4-7 with three ribbies.

The Mets are now in last place in the NL East, 5.5 games behind the division leading Phillies. The juggernaut continues its scorched earth march through the National League tomorrow night in Atlanta, with Derek Lowe and Mike Pelfrey squaring off. 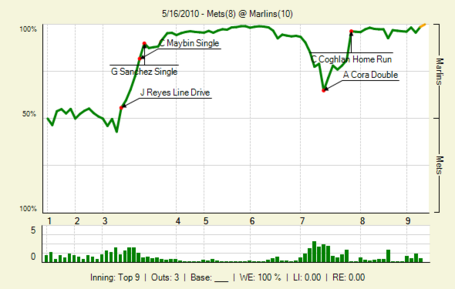