Is It Time to Promote Wilmer Flores?

Share All sharing options for: Is It Time to Promote Wilmer Flores? 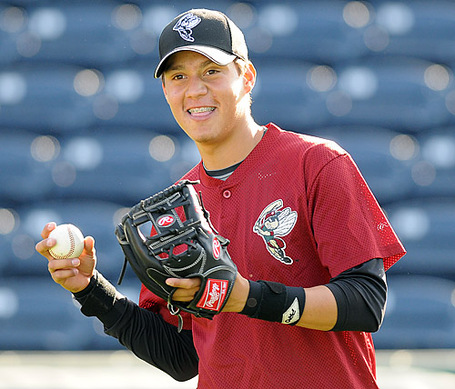 In the past week or so there's been some clamor from Mets fans regarding top prospect Wilmer Flores (pictured, courtesy of snapshots.mlblogs.com) and a possible promotion in the wake of his absurdly torrid start to the season. The reason? As I write this Flores leads the Low-A South Atlantic League in average (.364) and OPS (1.008) and ranks 2nd and 3rd in slugging (.589) and on-base (.418), respectively. He also just broke a 10-game hit streak which saw him bat .489/.589/.778 with 2 bombs in that span. Oh and did I mention that Wilmer won't turn 19 until August in a league where the average age is around 21?

Another catalyst for this discussion was the couple of intentional walks he took Sunday, making five total on the season which also leads the circuit and paces the rest of his team who hasn't drawn one, combined. Beyond that, sometimes shortstop Reese Havens was recently promoted from High-A St. Lucie up to Binghamton, seemingly leaving a Wilmer-sized hole at the keystone.

He's clearly adjusted to the competition of the Sally League, there's no doubting that. As BP's Kevin Goldstein gushes in his most recent 'Monday Ten Pack', Wilmer's already knocked 5 homers versus 4 all of last season (also in Savannah) and has improved his K:BB from above 3 down to 1.5 thus far. However, I don't think it's quite as clear-cut a decision as some people are making it out to be:

First and foremost, I'm not one to hold somebody back because of an age gap as long as they're performing but a jump up to Hi-A would make for an extremely large gap and I'm not sure this season's sample is enough to sell me on that quite yet. He still only just topped 150 ab's; in a similar sample of ab's, St. Lucie's Eric Campbell is looking like the next David Wright yet his career minor league batting average is .253 and he profiles as a role player at best. Obviously they're different cases but the fact remains that 150 ab's can definitely be deceiving so it's premature to say he's done learning from the SAL, especially since the June Draft is only weeks away and Lo-A is definitely a level that gets injected with college pitching talent.

Then there's the intentional walks issue. But while his performance has most definitely warranted some trepidation, the fact of the matter is that the Savannah lineup has quietly been pretty bad thus far. Camouflaged by Wilmer's gaudy performance, the extraordinary work of the entire Gnats pitching staff and the top spot in the Sally, the Sand Gnat offense remains in the bottom 3-4 teams in average, slugging, on-base and total bases. Legitimate prospects like Jefry Marte, Cesar Puello, Alonzo Harris & Nick Santomauro have all scuffled (none of them has even cracked a .700 OPS) and if it weren't for the resurgent Juan Lagares, Wilmer really would be on his own. My point here is that there is just too much talent for this to continue and as the lineup improves around him, Wilmer will continue to see pitches to hit.

Finally, while frankly there is no name big enough to block Wilmer, it's not as if the St. Lucie middle infield is the black hole people are making it out to be. How quickly we forget about ST hero Jordany Valdespin who will soon be back from the DL (broken finger) to play 2B. And interestingly enough, they've already got an extremely young Venezuelan SS, full of tools and athleticism, slick with the glove and actually 5 days younger than Wilmer who is tearing it up by the name of Wilfredo Tovar. Not yet well-known in prospect circles, the Mets like this kid enough to send him as Havens replacement in St. Lucie and he hasn't let them down so far; in 11 games since his call-up from extended ST, he's batting .375/.405/.475 against players 4-5 years his senior. Neither guy is a stud like Wilmer but they're certainly not the schlubs people are implying when campaigning for Wilmer's promotion.

Ultimately, if it were up to me I wouldn't do it yet. Now don't get me wrong, it wouldn't be a Mejia-esque rush job if they did promote him. In fact, I don't think this is the kind of move where there's a clear right and wrong answer until it actually happens and we can see the results. But for me, I'd keep him in Savannah at least a month or two longer because I personally prefer a more conservative approach to prospects, especially young guys like this. It's just too easy to stunt their development by being overexcited and pushing them; look at Juan Lagares who is just now recovering from his horrible placement in Savannah 3 years ago as a 17yr old. And frankly, what's the harm in letting Wilmer beat up the Sally League as part of a first place team and a group of prospects that is moving along together at least until the All-Star Break? And even though they're playing well now I'm expecting a tough year in St. Lucie, especially in that lineup. It seems that the Mets and Terry Collins agree so I'd be surprised to see him at Digital Domain Park too soon.