Share All sharing options for: Nationals 5, Mets 3: Dickey Strong, Can't Get Any Relief

I submit that this was one of the more unique, and strangely fun, games in team history. There was:

Maybe one of the FanGraphs guys can calculate the chances of all that happening. Sure, Livan Hernandez walked more than he struck out and the Mets managed just five total hits, even if there were some unlucky line-drives-turned-outs. But what is to be expected when the team's best hitter, David Wright, is given a day off? Try as anyone might, there isn't a way to pin this loss on David.

Dickey was sturdy if unspectacular in six innings of work (five hits, two runs, four walks, two strikeouts). Nationals batters seemed to figure him out the second time through the order. He won't be able to sustain success if the K:BB ratio isn't better, but it's fun watching the knuckleball and he should stick around to eat some innings. Dickey was lifted in the top of the 7th for pinch hitter Alex Cora after Henry Blanco led off with a single. To the surprise of no one, Jerry Manuel called for a sacrifice bunt. Jerry is revolutionizing management strategy, one pinch bunter at a time. That's two games in a row that a pinch hitter was used to lay down a bunt. Is it possible that Jerry's lieutenants realize how ridiculous some of these decisions are, yet don't say a word to keep the attention on the general's job security as opposed to their own? Maybe. It's a theory. Ripping Jerry's moves has become boring, but it's always worth documenting when he adds a new chapter to Jerryball: The Art Of Giving Away A Game. Pinch hitting for the pitcher then calling for a sacrifice bunt is such a move.

The bullpen went flaccid in relief of Dickey, allowing three runs in the 7th. Fernando Nieve continued to be ineffective, giving up two hits and two runs in his brief one out stint. He has only one strikeout in his last eight appearances, spanning 5.2 innings. Basically it was a prototypical Jerry game -- pinch bunting, a high-leverage Nieve appearance and burning through four relievers in two innings.

Another fun aspect of tonight's game was the opportunity for somewhat lewd puns on Dickey's last name. A sample of alternative recap titles, mostly aggregated from the tonight's gamethread:

Offensive? Possibly. Whatever. John Maine vs Craig Stammen is the matchup tomorrow. Go to Blue And Orange Open Mic Night At River in Hell's Kitchen for a game watch.

Angel Pagan has a career in a day
Inside-the-park homer, starts a triple play
Adds another fine catch as part of his yield
(Why does Gary Matthews ever play center field?!?)
But worn-out Nieve's fastball no longer has life
And in retrospect I should have listened to my wife
Spectacular plays should have provided the clues
This is precisely the type of game that the Mets lose 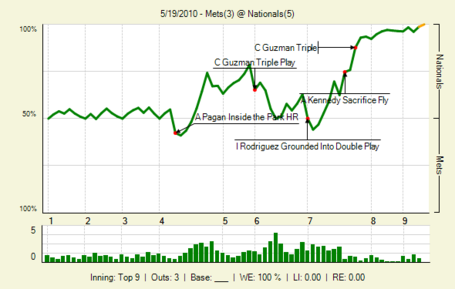