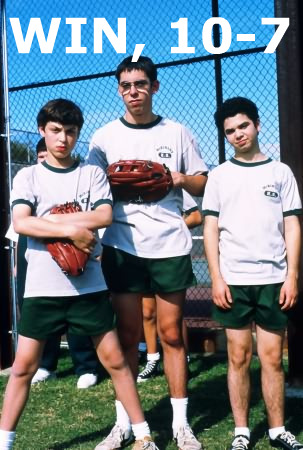 John Maine threw just five pitches in the first inning tonight before Jerry Manuel (and Dan Warthen?) pulled him from the game. They later cited a modified delivery and decreased velocity as the rationale for their hasty verdict on Maine's capacity to continue pitching. Maine was visibly upset as he walked off the field, though not overly histrionic or anything. He unloaded on Manuel after the game. Some highlights.

"Cut me some slack."

"I didn't get asked a chance [to stay in] and that's what I'm most upset about."

Not to be outdone, Dan Warthen said words.

"John is a habitual liar when it comes to his health." (source)

Warthen is probably right, but he was pretty much King Douchenozzle for sharing that bit of insight with the media. It's not the first time Warthen has badmouthed a Met, as last offseason he blamed the Mets' catchers for their pitchers' struggles in 2009. When asked how he felt about the defense and game-calling of Omir Santos and Brian Schneider, Warthen curtly replied, "Next question."

Maine's early exit got me wondering how often a Mets starter was yanked from a game without recording an out. Turns out it has happened 17 other times, most recently to Bobby Jones in 2000. Before Jones it was, well, Bobby Jones (the same one, not the other one) in 1997, who was removed after allowing eight runs on three hits and four walks to the Braves. Tonight was the first zero-inning start by a Mets pitcher who didn't allow any runs in the effort.

Hisanori Takahashi is starting tomorrow against the Yankees, and R.A. Dickey is filling in for Jon Niese, so if Maine is going to miss a start or more I fear that Oliver Perez will be slithering back into the rotation some day soon. That's bad news for everyone. Then again, Raul Valdes threw 80 pitches and would be right on schedule to take Maine's next start, so maybe we can all hope for that to happen.

Behind Valdes, the Mets' bullpen was unkind. Manny Acosta and Pedro Feliciano managed to pitch scoreless innings, but the former is Manny Acosta and the latter has 12 walks and 14 strikeouts in 18 innings this season and is playing with fire every time he faces a right-handed batter. Future Binghamton starter Jenrry Mejia allowed three runs in 1.2 innings and Francisco Rodriguez gave up a run in an inning of non-save work.

If you didn't read the headline -- or, you know, watch the game -- you might gather from all of this bad news that the Mets came up on the losing end of another one, but they actually won this game thanks to an offense that pounded out 15 hits and four walks, plating ten runs in all. Jose Reyes reached base three times on a walk (intentional) and a couple of hits. Jason Bay collected three singles and scored twice. David Wright went just 1-for-4 but drove in four runs and didn't strike out even once! Rod Barajas went 2-for-5 with his 10th home run of the year and nudged his OBP needle over .300. His .892 OPS leads the team. Ike Davis went 3-for-5 with a double and three runs scored and inched past Wright in OPS, .882 to .879.

The Yankees come to Citi Field for a three-game series beginning on Friday night. Hisanori Takahashi makes his first stateside start against Javier Vazquez, whom the Yankees should totally trade to the Mets for Oliver Perez.

After five pitches, Maine comes up lame
Valdes steps up with five strong to save game
Wright's three-run double starts hitting parade
While showing claims that he's done are charade
Mets hold on and their fans do give thanks
Now here's hoping they don't get swept by the Yanks 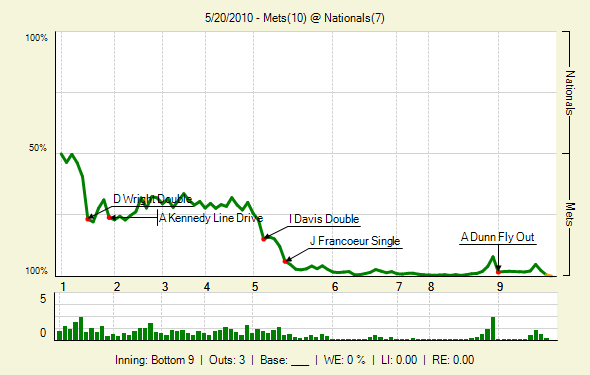