Share All sharing options for: Jose Reyes Cumulative WAR Versus Other Shortstops

FanGraphs now has historical batter WAR and broke out some sweet new graphing tools to go along with that data. I quickly ran Jose Reyes's cumulative career WAR by age and compared it to those of Derek Jeter, Miguel Tejada, and Nomar Garciaparra. 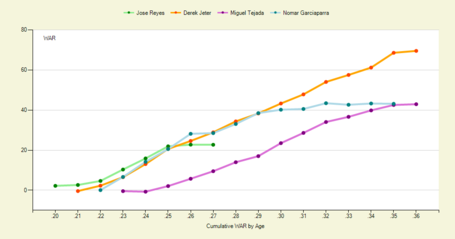 Even with his lost season in 2009 Reyes is right there with Jeter and Nomar and well ahead of Tejada, who retroactively got a late start when we learned a few years ago that he was older than he claimed. If it looks like Reyes is lagging a bit at the end it's because the graph includes his age 27 season -- i.e. 2010 -- which is barely a quarter of the way through (and which has shown encouraging signs of life lately).

The takeaway here is to all of the Reyes haters -- I'm looking at you, Bob Klapisch -- who think he somehow isn't living up to your expectations: By season's end, Jose Reyes will have accumulated as many wins as your beloved Derek Jeter through age 27. Sure, Jeter had four rings by then, but if you think that says more about Jeter vs Reyes than it does about their respective teams, you're probably just passing through here on your way to some other site. Godspeed to you, then.