Share All sharing options for: Mets 3, Phillies 0: The Goose-Egg Sweep 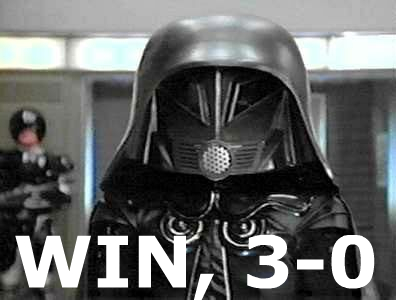 Mike Pelfrey was not fantastic, and bringing in your spotty right-handed Closer™ to face Chase Utley and Ryan Howard instead of leaving in your lefty specialist -- you know, whose job it is to get lefties out -- was head-scratching to say the least, but a few timely double plays here and another Jose Reyes monster game there and the Mets emerged with a 3-0 win and a three-game shutout sweep of the first place Phillies.

Mike Pelfrey was hardly his sharpest tonight, walking five through seven innings and working in and out of trouble all night long. His sinker paid big dividends as three potential Philly rallies were snuffed out by double play grounders, and Pelfrey generated 11 swing-and-misses (10.5%) on the night. For this game, the result is all that really matters, and it was indeed a favorable one for Pelfrey and the Mets. With the win they move to within two games of the Phillies for first place in the NL East. Their +26 run differential is sixth-best in the National League.

Pedro Feliciano is a LOOGY: a Lefty One Out GuY. He dominates left-handed batters and melts like chapstick in a hot car against righties. Whatever he says, or Jerry Manuel says, or anyone says, about Feliciano's ability to get righties out is quite simply not grounded in reality. For his career, lefties have a .578 OPS while righties mash to a .792 OPS. In 2009 it was .594 (vs LHB) and .851 (vs RHB). In 2008 it was .575 (vs LHB) and 1.014 (vs RHB). This year it's .527 (vs LHB) and .837 (vs RHB). The conversation should be over by now. He was anointed the eighth-inning guy earlier this season, but there are really few circumstances where he should be allowed to stay in against righties at this point. Maybe if you've got one in between two tough left-handed batters, okay, you could make a case for leaving him in there.

This doesn't have to be a major shortcoming, though, because Feliciano is really good against lefties, which is why I was perplexed when he gave way to Francisco Rodriguez in the ninth with Utley and Howard scheduled to bat first and second that inning. He threw just 14 pitches in the eighth, so why not at least let him go out for the ninth to do his job? It all worked out, so the result was good even if the process needs refinement.

For Reyes, his three hits gave him his fifth consecutive multi-hit game and he has raised his OPS 93 points in that span. It's still just .628, but hey, that's a big improvement over .535, no? Perhaps most important, he's swinging the bat well even when he doesn't reach base and he has had very few bad at-bats over the past week. These are good things.

And finally, without making too much of it, a three-game shutout sweep of the Phillies is really, really sweet. It was an auspicious convergence of solid pitching for the Mets and an ice-cold Phillies lineup, but it was a helluva lot of fun to watch and we can only hope that the Mets can bring their good times with them to Milwaukee this weekend.

Beer of the game: Hobgoblin from Wychwood Brewery, Oxfordshire, UK.

"The taste is full and rich, with a rich malty body, sweetness, slightly earthy, toasty, a faint coffee element, and a perfectly balanced piney hop bite. The finish is smooth, long-lasting, and aromatic. The flavours blend together very well and not much stands out on its own, but the balance and blending are outstanding. The result is delicious and full flavoured, yet exceedingly smooth and drinkable." --RateBeer User Review.

Big Pelf continues the Philly run drought
Phils don’t draw blood once in this three-game bout
Guess, in real park, tough to hit the ball out
Philly is dominant? Starting to dou 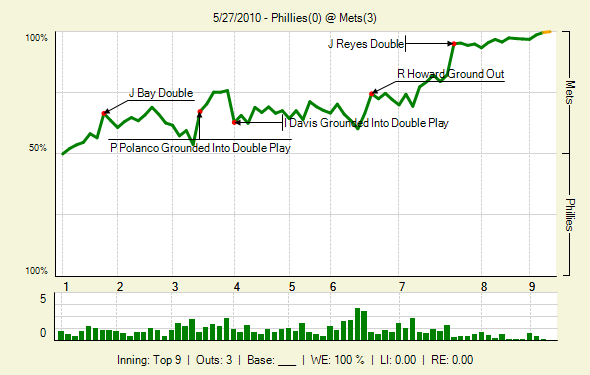