What Historical WAR Can Tell Us About David Wright

Share All sharing options for: What Historical WAR Can Tell Us About David Wright

FanGraphs has historical WAR charts up and I thought it might be fun to play around with David Wright's place in history, especially after seeing Eric Simon's concise post on Jose Reyes this week. For comps I chose his current batting coach Howard Johnson because he was a former Mets hot corner player with power and speed, Mike Schmidt because he's a bit of a bellwether third baseman for the modern era, and Scott Rolen because he was the most similar player to David Wright at 26 years old according to Baseball Reference. 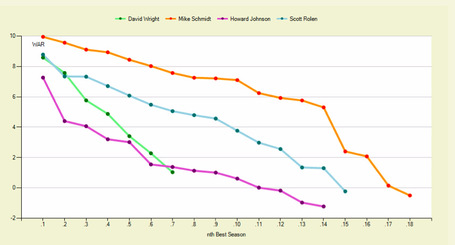 This graph tells me the least of the three, actually. At 27, Wright is young enough that you'd think that he was pre-peak. Of course, last year put some doubt in people's minds, and his strikeout rates have people worried, but it's still possible that Wright has a better season in him, which would move his whole curve over to the right and make it look more like Scott Rolen's. Schmidt's curve looks out of reach already, that's about all we can say from this graph. Oh, and Wright's better than Howard Johnson. Newsflash.

Next up, cumulative WAR by age. 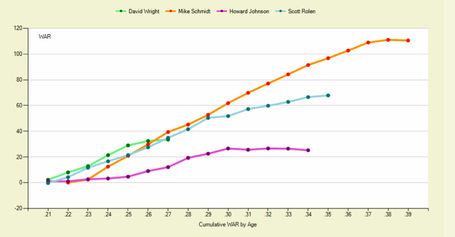 I like this one because it gives you a sense of their production at the same relative ages. It actually makes Schmidt-level production look more attainable, and gives Wright a little boost for being excellent earlier. If you look at Wright's 25-year old season - .302/.390/.534 with 33 home runs, 15 stolen bases, and a 7.6 UZR/150 at 3B - and compare it to Schmidt's 25-year old season - .249/.367/.523 with 38 home runs, 29 stolen bases and +15 on Total Zone they certainly look within spitting distance of each other. Wright also compares favorably to a young Scott Rolen, but the dip in the curve has taken him right into Rolen's wheelhouse. Oh, and Howard Johnson wasn't as good. Newsflash.

This last one really puts their relative careers in perspective. WAR by season: 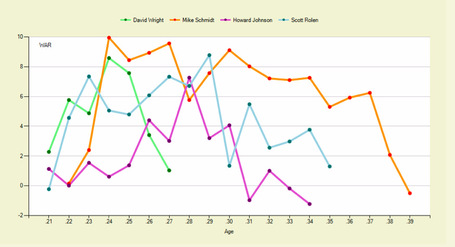 Wright had the same meteoric rise to the top of baseball as Schmidt - but he's obviously had some deeper valleys in his young career than Schmidt ever put together. At this point, it looks like Wright will even out and end up in Rolen's territory, so kudos to the Baseball Reference similarity engine. The one thing that makes this graph a little misleading is that the last data point for Wright is incomplete. With the help of some bad math and some back-of-the-notebook projection we can project Wright for a 3.4 WAR this year (using his current WAR as a rate stat and projecting him to 700 plate appearances). That pulls him up closer to Rolen, but significantly short of the current Cincinnati third baseman at the same age. Oh, and look, Howard had a nice little peak. Before he disappeared at 31.

Wright's last two seasons have certainly put a dent in what was a Hall of Fame young career, and of course there are reasons for concern. On the other hand, if he gets back on the horse and settles in around four or five WAR a season, and displays a little more longevity than Rolen - a possibility given his athletic build and game - he could surpass the player most similar to him to date. And it really looks like he just needs to find his old approach at the plate to do so.