R.A. Dickey wasn't quite as strong as his last time out against the Phillies, but he lasted seven innings and didn't walk anyone in a 10-4 Mets win. Jose Reyes, Luis Castillo, David Wright, Angel Pagan, Jeff Francoeur, and Henry Blanco each collected at least two hits -- Francoeur went 4-for-5 and Blanco 3-for-4 with a walk -- as the Mets pounded out 16 hits and drew eight walks as they shamed Randy Wolf, Jeff Suppan, and the rest of the Brewers' staff.

The Phillies lost to the Marlins so the Mets are back to within three games of first in the NL East.

The Mets are in San Diego beginning on Monday night at 10:05pm EDT when Hisanori Takahashi takes on Kevin Correia.

Mets bats explode, giving their all
On behalf of the man with the dancing ball
Francoeur had four hits, by math quick and dirty
I believe that his average is up to .230
But mauling of Suppan makes this fact quite certain
Revenge is not best served four years after curtain 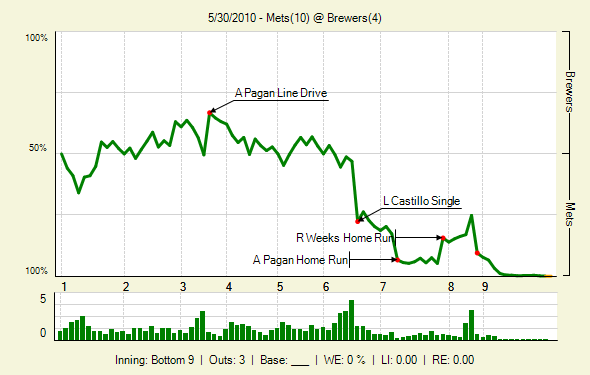 Nice job by Jonathan.; his effort in the game thread embiggens us all.