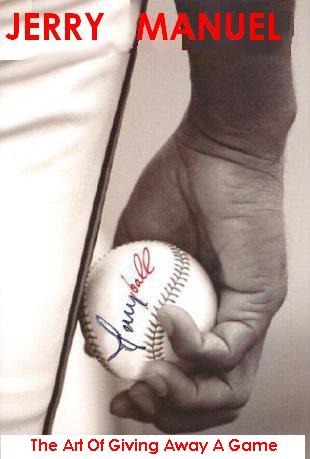 I'm sure there's plenty of Jerry strategy that I overlooked. What else belongs in Jerryball: The Art of Giving Away A Game?

-When a young, unpolished rookie blows away a bunch of Minor Leaguers in Spring Training, it's best to "force" the GM into bringing him up onto the Major League roster, and then using him in a haphazard manner, more or less like a Rule 5 Draft pick. Be very adamant that the player is integral to the team, though, when questioned.

-Certain players "just get it", while others don't. The players who "just get it" do so because of various reasons, be it familial lineage, passion for the game, a "never-say-never", among others. These players are the types of players that winning ballclubs are built around.

-Go with your gut, when all else fails. That is not gas: The human digestive system has mystical prognosticating powers; listen to it.

-Don't bat your best hitter third, because the clean-up hitter needs protection. Likewise, don't bat your leadoff hitter first, because he might be needed elsewhere in the lineup.

-The best way for a marginal player to work out of slumps is by giving them playing time. The more, the better; they'll eventually sort things out.

-When more than one player are competing for the same spot, give everybody a fair chance to win that job. In a few limited at bats, whoever does better during that time span is obviously the better player. Have that person get the majority of playing time; limit the playing time of the other players- they're obviously not as good.

-The best time to rest a player is after he has a big game. He's obviously going to be tired, so let him have some time off.

-Moving the runner over is key. When there is a man on, and less than two outs, advance the runner with a bunt, even if that batter is your number three hitter.

-It is always best to play it safe: When he's due up at bat, remove the pitcher for a pinch hitter, one so that pinch hitter can bunt, instead of the pitcher.

-When the bunt is on, and the pitcher is having trouble throwing strikes, don't give up hope. Eventually, he's going to throw a strike, and when he does, lay that bunt down.

-In late innings, remove your outfielders in place of bench players, even if those bench players aren't the greatest with the glove. They need some playing time, too.

-When it's late in the game, or in extra innings, make sure that your emergency catcher stays in the game at all costs. Remove your all-around best player and team leader in favor for him when at all possible.

-Use as many double switches, pinch hitters, and defensive substitutions as possible, in order to confuse and demoralize the opposition. If this is a National League game, do this even more often than in the American League.

-Players who are on the bench are there for specific reasons. Every once and a while, though, give them the opportunity to prove themselves- call them up to pinch hit in a high-leverage situation without giving them much warning. If they pull through, they deserve more playing time. If they don't, bench them some more, until they learn their lesson.

-Starting pitchers should throw no more than 100 pitches or so per start, no matter the score or inning. This prevents the pitcher's arm from falling off from overuse, and lets the relievers get their fair share of work. Late in the game, a wild card journeyman reliever is a better bet than your proven starter.

-In order to make sure that everyone stays loose, play it safe, and have relievers warm up and throw pitches even when their services are not yet needed. This strategy is especially useful in extra inning games- the more pitches they throw warming up, the more ready they'll be.

-Practice makes perfect. Therefore, the more you use a reliever, the more effective they'll be in future games.

-Closers must only be used in save situations. When you're in a situation where you need a definite out, bring in someone other than your best reliever. This is because closers can only throw three outs worth of pitches.

-When your mop-up man pitches an 8-pitch scoreless eighth, you must take him out of the game so that your most overrated and overworked reliever can pitch a near-meaningless ninth.

On Dealing With The Media

-Schmooze with reporters, beat writers, and talk show hosts whenever possible. Make sure to provide good quotes/sound bites for them, so you get on their good sides, and they become less apt to question your managerial pedigree, qualifications, and decisions.

-Stroke the reporters' egos. Tell them that their question "is a good question", regardless if it is or not. This will make them less apt to question your managerial pedigree, qualifications, and decisions.

-Make sure to pause every few moments, to inwardly ponder the question and the multitude of possible decisions. Because it's rude to simply sit there in silence, make sure that you fill in the gaps between your stream of consciousness with "uhs", "ahs", and similar grunts.

-When things get too serious, no matter the issue, laugh and make levity of the situation; cooler heads will always prevail.

-When your job is on the hot-seat, winning road games in Southern Californian is a ticket to the unemployment line. It's best to avoid wins in these situations.

-Never take off your shirt, and challenge Minor League players to fights. Let somebody else do that.