Share All sharing options for: Mets wOBA By Position

The advanced batting statistic wOBA (weighted on-base average) is one of the best around. What's more, it's scaled to on-base percentage so it's pretty user-friendly. Average wOBA is in the .330-.340 range, a poor hitter is .300 or lower and a great hitter is up near .400. Here are the Mets' wOBA by position, with approximate NL average wOBA and the Mets league rank also listed (through Wednesday's games): 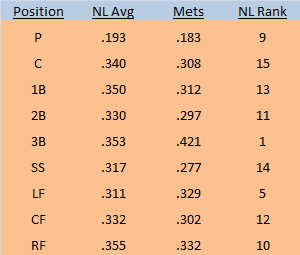 The previously mentioned Carlos Lee isn't the only Houston Astro struggling. It's no secret that the Astros lineup has been a total joke, but check out just how bad it's been: 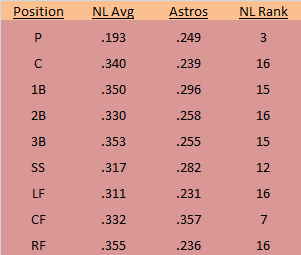