How Does Pelfrey's Mix Stand Up?

Share All sharing options for: How Does Pelfrey's Mix Stand Up?

There's a lot of love for Mike Pelfrey going around these days. It's easy to love a guy when he's showing results like these: 2.23 ERA, 1.17 WHIP, eight wins against one loss. You might even toss words like "proud" around after all the struggling that Big Pelf has endured. He's certainly putting up zeros.

But these are all results-based emotional reactions, and we have to remember that not only is he only putting up near-average strikeout rates (6.47 K/9, 7.01 K/9 is average) and walk rates (3.12 BB/9, 3.47 BB/9 is average), but there's even further we can go with process-based analysis. We can talk about how his 82.4% strand rate should regress (the number is 70% across baseball) and that his BABIP might embiggen (.271 BABIP, which trends towards .300 across baseball). We can say that there are numbers that suggest that his process doesn't quite 'deserve' these results just yet. But in a way these are still results. Results that get at the process, but still results in a way.

We've gotten a little closer to judging the process when we've marveled at his new split-change, but maybe we can take this sort of analysis further. Can we look at each of his pitches and see how they match up against average pitches of that type? Of course, we'll still be walking the fine line of process and results, and this can be a long journey, but let's take the first step. Let's start the process, as you might say.

First, we aren't talking about FanGraphs pitch-type linear weights here. We're trying to compare actual pitches to other actual pitches of the same nature. Perhaps taking a screen grab of Harry Pavlidis' useful work on benchmarks will explain this idea best. Here are some average stats for each pitch across baseball so far this year: 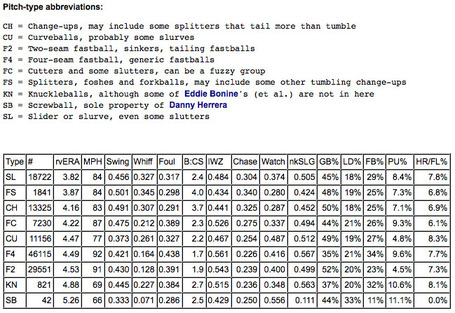 Because my SQL skills are still in development, we'll focus on Pelfrey's main pitches and their corresponding velocity, whiff, foul, and strike rates. Texas Leaguers gives us most of those things per pitch. Daniel Moroz of the illustrious CamdenCrazies.com, site of our current competitors, ran the ground ball per pitch type data for Pelfrey and deserves many adult sodas for his work - and some cheers. If you like statistical work, you'll recognize the name from Beyond the Box Score, and he does excellent work on the Baltimore Orioles on his own site.

First, Pelfrey's four-seam fastball, which he throws 43.9% of the time this year. According to Texas Leaguers, his fastball is almost exactly average in speed: 91.9 MPH. See above, the F4 has an average speed of 92 MPH. He gets a whiff rate of 6.6% on the pitch, which sounds terrible, but is not really that bad. Because Texas Leaguers uses 'whiff rate' divided by all pitches (not swings), we have to take whiff rate (whiff/swing) and multiply by swing rate (swing/pitches). So we see that the average four-seamer gets a 6.9% whiff rate. So Pelfrey's four-seamer gets close to an average whiff rate, too. Doing the same math, we see that Pelfrey doesn't allow people to center his four-seamer well, giving up a 24% foul rate, and the average four-seamer allows 18.4% fouls. Converting Pavlidis' B:CS and swing rates to strike percentage (I can provide the math if anyone is interested), we find that Pelfrey's 66.4% strike percentage on the pitch is a little better than the 63.5% average for four-seam fastballs. Last, he gets a 46.9% groundball rate, which stacks up as elite when compared to the average groundball rate for a four-seamer (35%).

Next, let's look at his two-seam fastball. He throws it 22.9% of the time and it's an important part of his arsenal. By velocity, it is also exactly average, as it averages 91.1 MPH and Pavlidis has the average two-seamer at 91 MPH. The pitch isn't usually a swing-and-miss pitch (5.5% whiff rate on average), but Pelfrey actually gets 7.4% whiffs, which is nice. Pelfrey gives up about as many foul balls as average (17%, 16.8% is average). As for his ability to get strikes with the pitch, we know he gets 63.1% strikes with the two-seamer. After running the benchmark numbers through the wringer, we get 62.7% as the average strike rate. He gets 60.7% groundballs with the pitch, which sounds elite, but is actually just above-average for the two-seamer (52%, the highest groundball rate in the benchmarks).

Now it's time to check out his 'changeup,' but since it's a split-change, we'll use the benchmarks for the split finger rather than the changeup. If you are confused, check out this post that we did a while back on the subject. He's loving the pitch and its made him a legitimate three-pitch pitcher, but is it a great pitch on its own? He uses it 19.1% of the time and it averages 84.1 MPH, which is exactly average for split-fingers, and he gets whiffs on 13.1% of them, which sounds great. The problem is that most splitters get better whiff rates - the average is 17.3% according to Pavlidis' work. He gets fewer fouls than average (12.7% to 14.9% average), but despite that flaw, has an above average strike percentage (61.9% to the 60.1% benchmark). Big Pelf continues the pattern by having an elite groundball rate on the pitch (60.3% to 48% average).

We may have known many of these things from looking with our eyes, but it's always worth checking. Pelfrey may never be a real-life ace without the whiff rates of a real-life ace, but it's looking like he can be a strong number two, along the likes of Derek Lowe in his prime. Trust the process.