A Very Late Month in Review: May

Share All sharing options for: A Very Late Month in Review: May

So I realized something this weekend: I never gave y'all a Month in Review for May. I blame the draft and sleep deprivation for that. Now, it's not very useful right now, but I figure for continuity's sake, late is better than never. So here's our even-later-than-last-month's Month in Review. For those who missed last month's debut, Month in Review will look at the Mets' performance over the previous month from several different perspectives. You can find our last installment here. 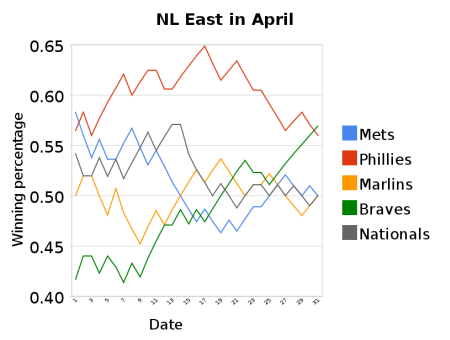 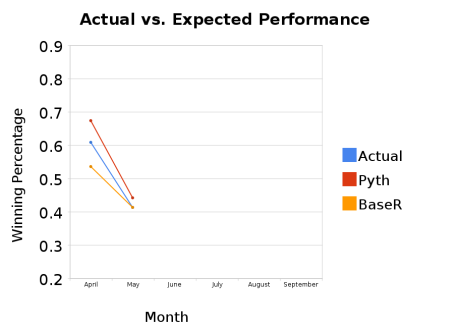 Well, that's kind of interesting. In April, the Mets' won over 60% of their games, and their pythagorean record suggested they should have won closer to .700. But BaseRuns clearly felt that too many runners who walked were being stranded, and that predicted the Mets to be more like a .537 team. In May, all three measures converged as the team had a much rougher month. In fact, there's barely any difference at all between the three. The Mets were a .413 team over the month, and, frankly, they played like one.

So what happened? Even BaseRuns, which felt that the Mets had overperformed in April still predicted a team well over .500. Instead they finished closer to .400. This chart might explain why the team fell off so sharply in May:

Once again, the "Opp. W%" column represents their opponents' season winning percentage through the end of April (I haven't included any dates since). They played nine different teams, and eight of them were .500 or better through the end of the month. The only team they should have beaten up on was the Brewers, who the Mets actually only took one of two. It was a simply brutal schedule. Comings, goings, and owies:

While I'm not a huge fan of Elmer Dessens the player, I've long felt there aren't enough Elmers in major league baseball anymore. Somebody has to carry the mantle of Elmer Valo. How's the offense been? We'll start with some basic numbers and move on to the charts.

Remember: all the defensive data is for the season to date (through June 13). Defensive data is so unreliable in small samples that FanGraphs doesn't even offer it, so I'll be providing full-season data throughout the season. For those who aren't familiar, RZR is Revised Zone Rating, and UZR/150 is Ultimate Zone Rating per 150 games. What I find especially interesting about the defensive numbers is that the RZR mark is the third worst in the NL, while the UZR/150 is the fourth best. Some very divergent numbers there. The offense isn't much different from April; the team's hitting for a little more power but isn't getting on base quite as often but both changes are minuscule.

Here's each individual player's contributions plotted by his UZR/150 and his wOBA. Again, catcher's "UZR/150" doesn't include any range numbers, just stolen base data per 150 defensive games. Here you go: 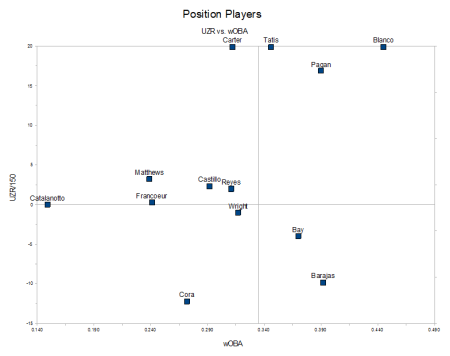 Click to embiggen. You generally want to be up and right. Last month, I was asked whether it would be possible to add a curve to represent a break-even point between offense and defense. After toying around with the idea, I'm going to leave things as is. There are different defensive and offensive standards from position to position, so the concept of a break-even point is going to be different across players. Any curve I'd introduce would be just misleading, but I do like how the graph can give you an idea of where each player's value lies. I should note that Mr. Carter and Mr. Tatis are not all that valuable defensively; they're beneficiaries of exceptionally small samples.

The numbers are a little different this month. The pitching staff came back to earth a little bit, and their collective ERA rose by nearly half a run despite no change in xFIP. How they came about that xFIP is a little different: strikeouts are down by a batter a game, but walks are also substantially improved, so it winds up a wash. Here's how the starters have performed on an individual basis: 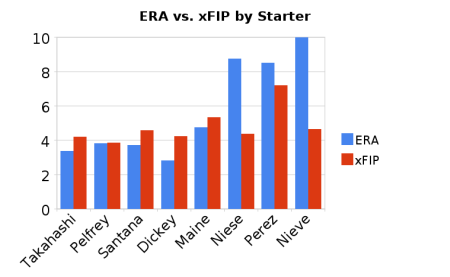 You generally want the red column to be lower, or at least equal in height to the blue. Quite a few more starters this month. As predicted back in April, Mike Pelfrey's ERA ran toward his xFIP and the two were about even in May. Jon Niese was exceptionally unlucky before he got hurt, and RA Dickey looks to be due a little bit of a drop back to earth, though it might not be so bad.

And here's one more, this one a start-by-start comparison of each starter's game scores, just so you can get a feel for how each guy's month went: 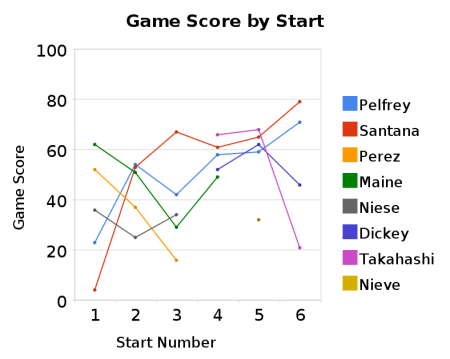 This might be a tad confusing and it doesn't work out perfectly, but I tried to provide the best feel for where one starter left off and a replacement came in. For example, after start three Oliver Perez was yanked and Niese got hurt, and they were replaced in start four by Hisanori Takahashi and RA Dickey. This way there's some sense of continuity in production from each rotation slot.

Last month I wrote that the bullpen ERA was unsustainable due mostly to an absurdly high walk rate and an absurdly low home run rate and BABIP. Well, the ERA swung to the other extreme, and it might be due to improve by half a run. The cadre's xFIP actually improved in May, but the level of performance in May was much closer to the truth than April's love-fest. 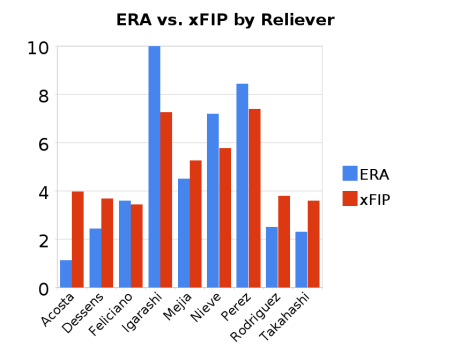 See ya next month. (On time, for sure.) Also, I'll have my formal draft review up tomorrow.