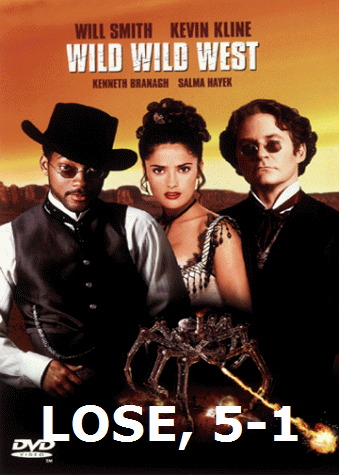 Adrian Gonzalez's game-winning grand slam in the 10th inning off Raul Valdes was just one of several unfortunate events in pro sports today:

Many otherwise level-headed baseball fans have called for the blown Joyce call to be overturned but that's just a terrible idea. It sets a dangerous precedent and Keith Law nailed it with this Tweet:

If you think Selig should reverse Joyce's call, please provide a list of all parts of baseball history you'd like him to rewrite.

The Joyce call induced the strongest visceral reaction for whatever reason, but the Gonzalez grand slam was also quite frustrating. That's two game-winning grand slams by the Padres against Mets at Petco Park in as many seasons. Maybe Denny's can bring back the Grand Slam Hologram Baseball Card promotion they offered a long time ago to commemorate the Padres' accomplishment. I remember almost collecting the whole set even though there isn't a Denny's anywhere near my house.

Back to the game. Johan Santana threw seven scoreless innings despite allowing ten baserunners. That makes just seven earned runs allowed in his previous six starts (spanning 44.1 innings) with only one win to show for it. He struck out three and walked five, and his K rate is now just 6.55 per nine innings. Kudos to Johan for battling in this one without his best stuff, but various peripherals suggest he's due for ERA regression. The "R" word is also applicable to the LOLpen. The early season success of the relief corps was a mirage of BABIP and stranded runners. Francisco Rodriguez blew the save in this one, allowing a 30 hop RBI single to David Eckstein in the 9th to tie the score at 1-1. Frankie had good stuff (12 swinging strikes out of 40 pitches) but his undoing was bad luck and a pair of poor 0-2 pitches. Here is the 0-2 pitch to Tony Gwynn Jr., who singled leading off the 9th inning (it's the turquoise meatball):

Eckstein's game-tying hit was also on an 0-2 pitch. I won't kill Jerry Manuel too much for his other moves because Frankie attempting a four-out save was a welcome sight. The double switch removing Jeff Francoeur from the game wasn't a completely terrible idea. Yes, GMJoke is worthless and Fernando Tatis would be a better replacement, but the switch itself made sense. It occurred in the 8th inning when Frankie entered the game. Francoeur made the final out in the top half of the inning, so the 7-8-9 hitters were due up in the 9th inning of a one run game. Removing any of the 1-5 hitters makes no sense and I'd rather not throw away the chance to tack on more runs by having the the closer bat.

The Mets' offense was impotent against a serviceable starter and some excellent relievers. David Wright struck out three times and unknowingly contributed to a noble cause. Jose Reyes, Angel Pagan, Ike Davis, Alex Cora and Henry Blanco combined to go 1-22. Cora in particular is nauseating to watch. He was signed this past offseason to a contract that everyone thought was ridiculous. Then we learned this week that his $2 million 2011 option vests straitjackets if he appears in just 80 games. He's now at 31 appearances. With Luis Castillo likely headed to the disabled list, I expect the option to vest in early August. Cora is now hitting .205/.287/.265, Argenis Reyes territory.

The Mets are off Thursday but start a three game set at home against the Marlins on Friday. Resident Assistant Dickey shoots for his third win against Anibal Sanchez at 7:10.

"A man of genius makes no mistakes. His errors are volitional and are the portals of discovery." -- James Joyce, on Jerry Manuel

"Pours a luminous golden color with no haze and a modest sized white head. Nose has some alcohol punch on it with light fruits such as peaches/pears. Some bready esters are present also, as well as on the palate. Some resembles a few qualities of a tripel, but in a more drinkable format. Finish is on the sweet side with quite a bit of alcohol warmth given the relatively low ABV." -- Beer Advocate review.

Santana struggles, though results are great
But losing the walkoff seems to be Met fate
K-Rod blows save, Valdes gets drilled
Gonzalez, unlike Mets, hits when bases are filled 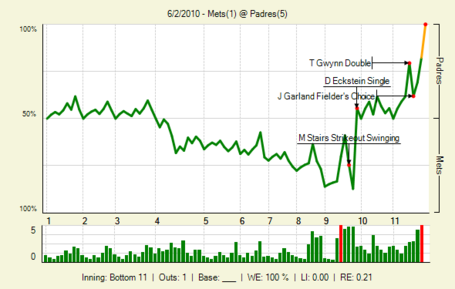