As the unkind weather and my desire to go to sleep fought an epic battle of wills, the Mets' offense pounded out 16 hits, drew seven walks, and plated 14 runs against Tigers pitching, including five runs on five hits and three walks in just two innings against Justin Verlander.

Less encouraging was Jon Niese, who let a 10-0 lead slowly trickle away to the point that he couldn't even finish five innings, instead ceding the mound to Fernando Nieve who retired the final batter in the fifth and eventually held on to get credit for the win. Niese gets a pass to some extent because he actually pitched quite well before the third-inning rain delay but struggled to keep things together after sitting on his keister for an hour.

There's plenty to debate about whether Niese should have been brought back into the game at all. Jerry Manuel apparently said that he wouldn't have done so if Niese had thrown 50 pitches prior to the delay or if the delay had lasted more than an hour. Well, the rain delay lasted 58 minutes and Niese tossed 45 pitches through three innings before the weather interrupted play. I don't know if he actually had those arbitrary figures in his head before the rain delay or if he invented them afterwards to fit his actions, but their arbitrariness is indisputable. At all events, the decision to bring Niese back to pitch the fourth inning did not go according to plan. If there was a plan. I'm guessing no.

Unintentionally sexual quote of the game: "Nevermind the humidity, it's getting sticky in other ways here tonight." --Howie Rose on the narrowing of the Mets' big lead, or something.

Downpour of runs after rain ran game aground
Niese, post-delay, gets himself knocked around
With Beltran looming, Pagan answers the bell
Four hits for fourth outfielder? Only Beltran's knee can tell 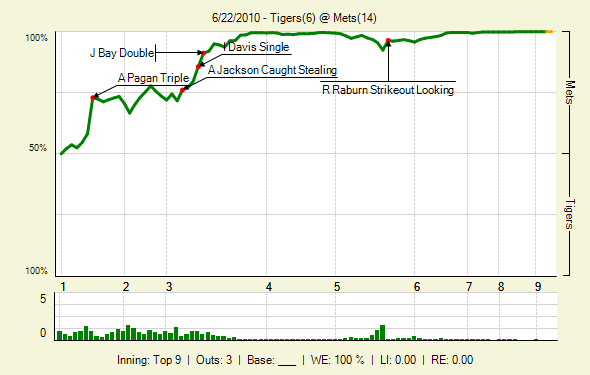