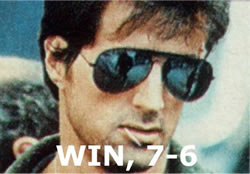 Hisanori Takahashi had his second straight brutal start, allowing five runs on six hit and two walks in 5.1 innings. Ryota Igarashi was bad, again, allowing what could have been a back-breaking run in the top of the seventh after the Mets closed the gap to 5-3 in the prior half inning. Jeff Francoeur's beard wasn't having any of that, though, as it powered his surrogate to a three-run home run in the bottom of the seventh to knot the game at six runs apiece. The Mets plated the winning run in the bottom of the eighth when Fredi Gonzalez elected to play the infield back with runners on the corners and nobody out, which allowed an Ike Davis double play ground out to bring home Angel Pagan to give the Mets a 7-6 lead that Francisco Rodriguez managed to protect in another iffy ninth inning.

Rod Barajas has been struggling for a week or so and it was nice to see him pick up a couple of hits, because when he's not mashing home runs and his slugging percentage begins dropping (as it has), his sub-.300 on-base percentage gains prominence and triggers understandable concern.

And from the "Credit Where It Is Due" department, Jerry Manuel appropriately brought in Pedro Feliciano to face lefty-hitting Chris Coghlan with two outs and runners on first and second in the top of the eighth. cogz4Christ struck out looking to end the threat. Updated tally for Manuel: Dumb stuff 1,243, rational stuff 3.

Unintentionally sexual GKR quote of the day: "A beautiful job by rod." --Ron Darling on a blocked ball by Rod Barajas

Takahashi, once flawless, will now need to tinker
After pitching a second consecutive stinker
Five runs deficit? Nothing when Mets eat home cooking
Away Mets are homely, at Citi good looking
Francoeur is now god-like, thanks (I guess?) to the beard
Hits are welcome; but Met overreaction is feared
But thinking of future tonight is too deep
On this day, let us revel in dominant sweep 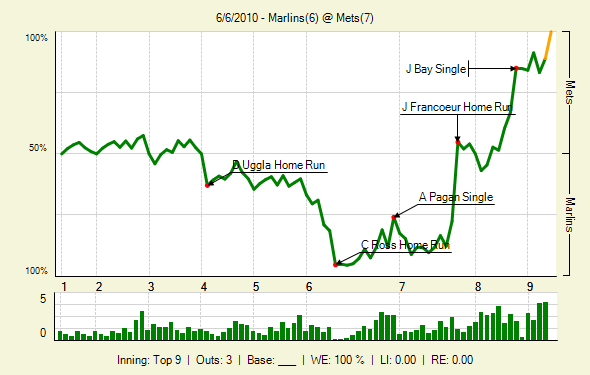 Nice job by Gina; his effort in the game thread embiggens us all.