Share All sharing options for: The Mets Are Swinging At Lots Of Pitches Outside The Strike Zone

My perception of the Mets' batters is that they are swinging at more pitches out of the strike zone than in past years. The numbers back up my amateur scouting eyes, as they have a 30.3% O-Swing %, good for 2nd worst in the league behind the Giants. (O-Swing % is the percentage of pitches a batter swings at outside the strike zone. It correlates strongly with walk rate and is a reliable measure of plate discipline. A lower O-Swing % is preferable for batters, obviously.) This is this highest rate for the Mets during the Omar Minaya era. At first, I thought Jeff Francoeur was mainly culpable for the increase but a look at all Mets' regulars shows that he is not alone. Here are the 2010, career and 2009 O-Swing %'s for Mets' batters, minimum 50 plate appearances: 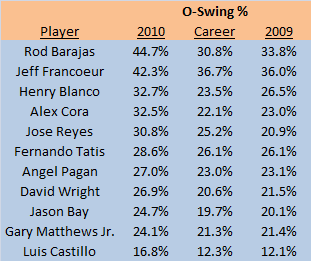 For anyone who doesn't want to peruse the numbers, here is a summary: every Mets batter has a worse O-Swing % in 2010 as compared to his career and 2009. Some of the differences are more pronounced than others but this is pretty incredible. What is the cause? A new strategy created by Howard Johnson? Francoeur rubbing off on everyone? FanGraphs pitchF/X BIS data screwed up?

I'm not sure at what point O-Swing % becomes reliable, if it does at all. It is not included on the list of stats at the Saber Library. The Mets' walk rate is about average at 9.1%, which is actually better than it was during some of the Omar years. So the poor peripheral isn't yet manifesting itself in a poor walk rate. I'm filing this under the "wait-and-see" category. It's something to monitor as the season progresses. Some are partial to the hacktastic stylings of guys like Francoeur and Pablo Sandoval, but I derive enjoyment from watching a batter lay off pitches out of the strike zone, followed by smacking the stuffing out of an offering in the zone. Make the hacking stop.