Share All sharing options for: Braves 4, Mets 0: Reyes Leaves In Seventh, Mets Offense Earlier Than That

If you made it through this whole game, kudos to you. There really wasn't much to get excited about on the Mets side of the ledger, and the only items of interest were ruinous ones. Jose Reyes went 0-for-3, losing his bat on a sixth-inning strikeout before being lifted due to injury concerns in the top of the seventh. It's the same injury that has restricted him to right-handed batting, and Jerry Manuel indicated in his post-game press conference that Reyes would miss Sunday's game against the Braves and would probably carry an injury note with him to Arizona for next week's All-Star Game.

Mike Pelfrey was unspectacular this afternoon, but the caprice of the batted ball gods was not especially favorable to him. He gave up 12 hits overall but just two doubles, one of which resulted from a Jeff Francoeur non-Delta approved flight pattern on a Tim Hudson flyball in the fifth. Eight of his ten in-play outs were on the ground, as was the majority of the singles he allowed, but with Alex Cora and a hobbled Reyes playing up the middle, Pelfrey didn't have much margin for error.

The offense is really struggling right now, which is the real story of the game. Jason Bay, Francoeur, and Rod Barajas saw just 23 pitches over nine combined at-bats, which is barely 2.5 pitches per plate appearance. Taking pitches isn't always a prerequisite for offensive success, but it often is, and in this case the converse was certainly true. Angel Pagan was the only Mets hitter to see the ball well, going 3-for-4 with a double and a couple of stolen bases.

These teams are back at it tomorrow when Johan Santana takes on Derek Lowe, as the Mets look to keep from falling five games back of the Braves. 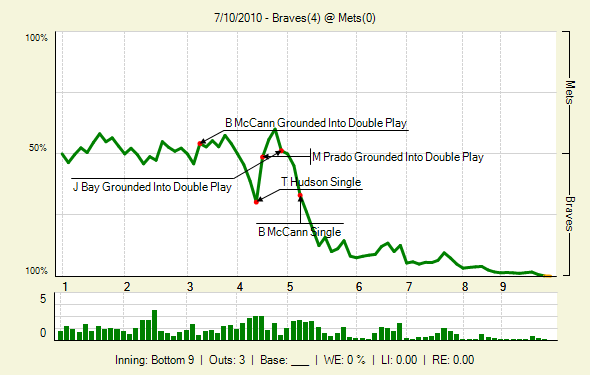