On Saturday in the NJ Star-Ledger, Mike Pelfrey admitted to feeling his way through a dead-arm phase.

"Every year, you just go through a little period where you don’t feel like the ball is coming out of your hand like it has that extra life on it," Pelfrey said. "That it jumps out of your hand. I feel like I’ve been going through that."

Both Pelfrey (10-3, 3.39 ERA) and Mets pitching coach, Dan Warthen, admitted this week the pitcher is suffering through a patch of dead arm.

Is this some sort of convenient excuse for a period of regression? Or do the pitch f/x numbers back up his story?

Check out this velocity game chart from the inestimable FanGraphs.com. I'm having a hard time spotting a dead arm phase, unless there's that little spot around his tenth start last year. 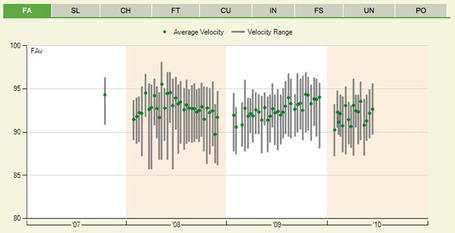 Unless his dead-arm phases last a start or two, it's hard to spot any... until this year. Look at his inconsistent velocity this year. It's almost like this year has been a dead-arm phase. We can see that he hasn't averaged 92+ on his four-seamer for the first time in his career. Now, a 0.8 MPH drop in velocity is not an incredibly terrible thing, but you'll notice that Pelfrey has had just as many games averaging near 90 MPH as he has averaging the 93 of old.

Let's look at his 'bad velocity' games this year. Looking at the chart above, he's had about six starts with poor velocity, where he was closer to 90 MPH than 93 on average. As far as I can tell from the picture above, starts #1, 5, 7, 8, 13, and 14 were ones where Pelfrey had velo problems. In those starts, he averaged 6.5 innings, 2.2 earned runs, four strikeouts and two-and-a-half walks. He had 9.2 groundballs to 7.3 fly balls. He gave up one homer. Taken in total, his average start this year has lasted 6.4 innings and he's given up 2.4 earned runs. He's struck out 3.9 and walked 2.2. He's had 9.3 groundballs to 6 fly balls. I don't really see a difference here, other than perhaps the effectiveness of his sinker is helped by a better fastball velocity (better GB/FB ratio overall than in bad velo starts).

There are a lot of things going on with Pelfrey, not the least of which is that it's entirely possible that these are the types of results we can expect from a pitcher that strikes out about five-and-a-half batters per nine, gives up three walks per nine, and gets about 50% of contact to guzzle grass. His career FIP is 4.23, his season FIP is 3.83, and somewhere in there seems to lie his true talent level. That makes a nice #2, as James Kannengeiser pointed out in his nice post this week, but not an ace. We can still be proud of him if we like.