Back again by popular demand (well not really) another road trip photo-diary, this time a jaunt through our nation's capital over a nice long holiday weekend. Once again, we only made it to one of the games but found plenty of other interesting things to do throughout the city nonetheless. I must say, D.C. is a really fun place to spend the fourth, we had a really good time and it might have even been great if Francisco Rodriguez weren't there. So if you've ever thought about taking a weekend trip down 95 with the club and you'd like a little snapshot of the D.C. experience, read on... 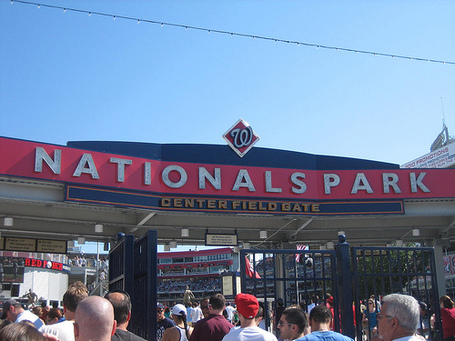 Like last time, let's start with the game. We went to the Saturday game which of course was the much ballyhooed Strasburg-Dickey game. In the end it was more the K-Rod game than anything and I probably should have realized we were in for it as soon as we parked the car: 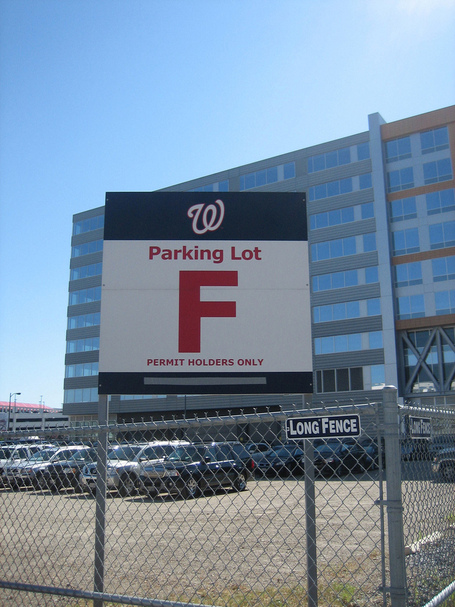 I'm not going to get into the specific mechanics of the game, it'll only make me angry. However, I will say it was pretty exciting to be in the park for a Strasburg game. Despite not pitching great, the electricity in the stands alone was worth it; I was shocked how many Strasburg jerseys were out there, FAR more than any other player including Zimmerman. I snapped a couple shots of the phenom, including my favorite shot where he and pitching coach Steve McCatty try to figure out how they're going to stop this juggernaut Mets offense: 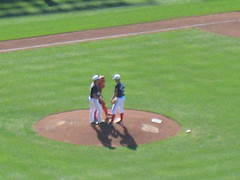 Despite the outcome I will say that the Nats new stadium is a great spot to catch a game, definitely a keeper. Nice wide open concourses throughout, excellent 360 degree flow around the park, good sight lines from all over, lots of good ballpark fare; I would characterize it as Citi Field-lite. Similar old school style mixed with contemporary design as our stadium (not surprising as they were designed by the same architectural firm) but with a lot fewer bells and whistles that give Citi so much character (ie Rotunda, Party Porch, etc). I will say this though, they blow us away when it comes to ballpark logos:

We moved all over throughout the game so we had a number of different 'Views from our Seats' but here were a few of them: 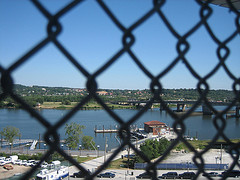 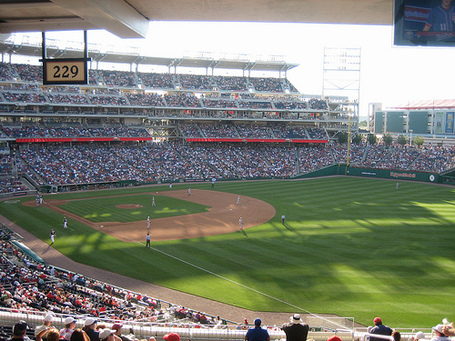 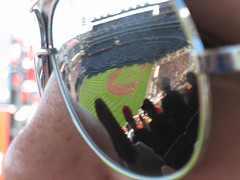 And now for the customary whining session where I bitch about things they've got that I want. First off, as much as I love the ballpark cuisine at Citi Field, I can no longer be satisfied without a bowl of chili at my disposal. Two, how much longer do I have to wait before we get one of those sweet bronze statues of Tom Seaver outside our park? And finally, as always I want a clock. Period. The Nats have one (gaudy thought it may be), the Yankees have one, for God's sake the Philles have one, can I get a gd clock up in this mofo? Please!? </rant> 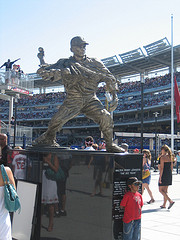 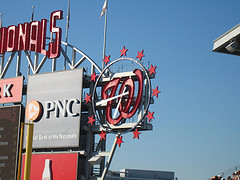 OK, I've gotten that out my system so now we can get onto the non-baseball activities of the weekend. In my estimation, the best part about D.C. is the museums, for two reasons: 1) I'm a nerd for all that historical-type junk and 2) Nearly every one is completely free admission which, as it turns out, is great if you're broke. We spent most of the weekend in the National Mall area, hitting museum after museum all for the whopping price of free. My favorite? I always like the Air & Space museum but I'd never been to the Holocaust Museum before which was at the same time very educational and very jarring; brewed up a pretty strong distrust of Germans (I'm watching you Gronauer!). No lie, some guy was walking around in a Germany national soccer jersey (with the World Cup and all) and I was afraid there was going to be a mob.

We also spent an afternoon at the Washington Zoo which is pretty Panda-crazy since they had one born there a couple years back which is apparently a big deal. It was about 100 degrees out but he didn't seem to mind, just kept eating bamboo. Oh, for anyone that doesn't mind going completely all-out tourist, Segway tours are actually a load of fun. We took a 2-hour tour where you ride right through the city streets from monument to monument. As always, Abe was in good form. I was also sufficiently amused that my Segway was named Romo.

Also a really random coincidence, we were walking through the Vietnam War Memorial at the very same time as the U-18 US National baseball team coached by none other than former Met Brian McRae. Apparently they were on a break from training at their facility in N.C. for the Junior World Championships in Canada starting on July 23. I've since looked at their roster and though they're too young for this last draft, a number of them are already top prospects for the 2011 draft (including SS Christian Lopes & C Blake Swihart). Also, these kids were horses; they're all about 5-6 years my junior yet most of them had at least a few inches and more than a few pounds on me. I didn't get any pictures because frankly I didn't want to come off as some kind of weirdo. And then I got back on my Segway and scooted away at six mph.

No big surprise that the highlight of the weekend was the firework show on Sunday night. They shoot them off from the Reflecting Pool in the Mall so we staked out a nice spot on the lawn next to the Washington Monument which turned out to be perfect. There were a lot of people out, like tens of thousands, but I was surprised that there was plenty of space for blankets and such and it never really felt too crowded. The show was pretty great, maybe not quite N.Y. or Boston in terms of the fireworks themselves, but in the context of the monuments, etc it was hard to match. 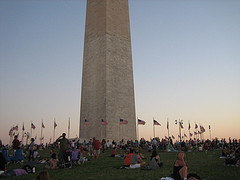 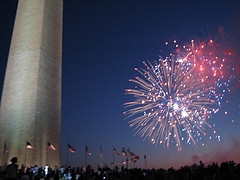 So that was about it. Definitely a good weekend and with the amount of times the Mets travel there each year, I'd absolutely recommend a weekend trip down. And if you can make it for the Fourth it's definitely the kind of thing you should try at least once. That is if you can tolerate the traffic.

That will probably conclude my summer road trip photo-diary series as we're not really planning any more trips (we'll see about an impromptu weekend in Philly) but like I said before, I encourage anyone who follows the Mets on the road to share your experiences!