We looked at Mike Pelfrey's velocity during his self-professed dead arm phase before the break, and didn't find much evidence in the numbers. However, some commenters (rightly) pointed out that a dead arm phase might affect movement as much as velocity. I was interested in checking out the numbers myself, so I climbed over the interwebbings to TexasLeaguers.com to use Trip Somer's fine pitch f/x tool. (Dirty!)

Because we don't have particular dates from Pelfrey on when he started feeling the dead arm, I arbitrarily sectioned out May 15th to June 15th as the 'before' picture. That month, Pelfrey went 5-0 with eight earned runs in 43.2 innings and had 28 Ks against 14 BBs with 21.89% of his at-bats ending in a groundout. Take a look at his pitch selection and movement: 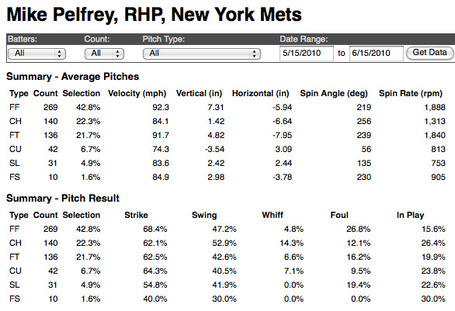 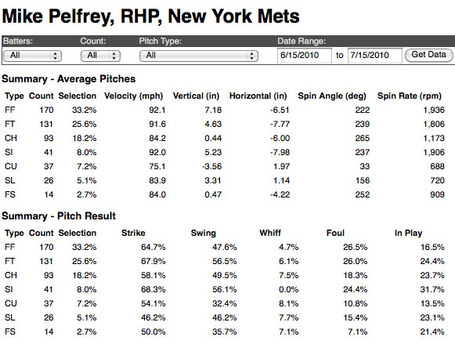 But take a look at the split-change, and you'll see some worrisome signs. First, he's using it about 5% less, which doesn't seem huge at first, but that change did take the split-finger from the second-most-likely pitch a batter might see to the third-most-likely. That seems interesting. You might also notice that the movement on the splitty was effected the most by the dead arm phase. He lost a full inch of movement on the vertical axes, and suddenly the split-change has almost no vertical movement relative the 'natural' downward trajectory induced by gravity. (I've never used spin rate before, but it's interesting that the spin rate on all of his non-four-seamer pitches is down, and that the splitfinger is down the most. That might suggest that the split-change is lacking 'tightness' or 'bite' coming out of his hand.)

The split-change was the reason for his rise and his maturation as a pitcher, and it looks like it's the reason for his recent struggles. He needs that third pitch, and hopefully it is just a dead arm phase that has robbed the pitch of its movement, so that he can regain the spice on that splitty and start inducing grass-guzzlers once again.