Share All sharing options for: Giants 1, Mets 0: Zito Too Much For Mets. Wait, What? 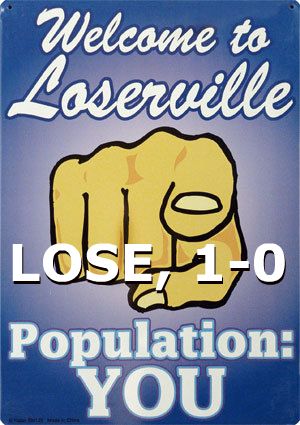 The Mets were shut out for the second straight game, a feat accomplished many times in their history and most recently last September against the Phillies and Braves. They've failed to score in three consecutive games thrice and not since 1992. They didn't stand much of a chance on this night, especially with the following lineup in which I've replaced each player's name with his July on-base percentage.

Sure the data is cherry-picked a bit and it's a very small set of games, but I'm really only dramatizing things a tad. Ruben Tejada leading off makes zero sense unless your reasoning is that a shortstop must bat leadoff lest the spot become confused when Jose Reyes returns. Tejada does neither of the two things you'd like from your table-setter: run fast and get on base. Naturally, Tejada had one of the Mets' two hits against Barry Zito, so he'll probably be back in at leadoff on Saturday.

Jeff Francoeur apparently got the start because Jerry Manuel promised to get him in there against one of the lefties this weekend. Francoeur predictably went 0-for-3, but he did contribute a really nice running catch in the fifth and doubled Zito off first for good measure. I don't really mind Francoeur getting in there against the occasional lefty, but those starts should really coincide with scheduled off-days for Carlos Beltran. Angel Pagan needs to be in there every day.

The wind was said to be swirling something fierce at the park, but whatever the reason, the Mets managed to pop out five times to first baseman Aubrey Huff, three times in foul territory. Add those to Zito's ten strikeouts and you get 15 of the 24 outs he recorded on which the Mets had no chance of doing something useful. Tejada was also thrown out stealing, so pile that one onto the heap of uselessness.

Mike Pelfrey was scratched from his scheduled start on Saturday with a stiff neck he suffered shooting beaver on the flight to San Francisco. He's scheduled to pitch Monday instead, and Hisanori Takahashi will take Pelfrey's start tomorrow against Matt Cain. Game time is 9:05 EDT.

Unintentionally sexual quote of the game: "A two-incher." --Gary Cohen on Jason Bay's dribbler in the top of the ninth inning.

Screencaps of the game 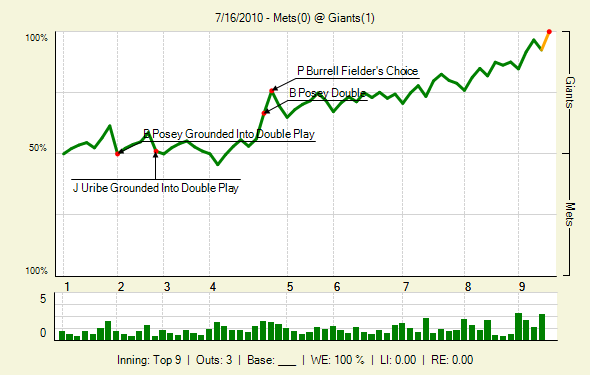