I became curious the other day when I heard [insert generic baseball talking head here] talking about the secondary benefit that R.A. Dickey provides for the Mets rotation.  In short, Baseball Insiders™ say that the knuckleball is so disorienting for a hitter that it can completely throw him out of whack for the next couple days as a result.  I've heard Jerry mention on several occasions that he always likes to have Dickey on the mound early in a series so as to reap the rewards of this supposed cascading effect.  However, I'd really only heard this claim supported with anecdotal evidence; so I figured why not take a look and see if the numbers bear this out.

So I compiled a basket of 'before' and 'after' offensive figures for each of the teams that have faced Dickey so far this year.  I decided to make the cutoff two days before Dickey's start for reference and then two days after, for results.  I picked two because I already question whether this "knuckleball effect" is actually even taking place, I highly doubt it would affect major league hitters for three days after the fact.  And now on to the data:

Just for some reference, let's look at the relevant numbers surrounding Dickey's first start of 2010:

So we're looking at AVG, OPS, walks, strikeouts and then total pitches seen.  I just picked a few stats that it seemed to me might be affected.  And keep in mind, the before and after encompass the two days surrounding a Dickey start.  So in this particular case, the Nats AVG maintains, their OPS actually climbs but the largest appreciable difference is in their increased patience as their walks skyrocket in the next couple days.  Now that you get the idea, let's look at the aggregate data for Dickey's entire 2010 season (11 starts):

And for all you visual learners out there: 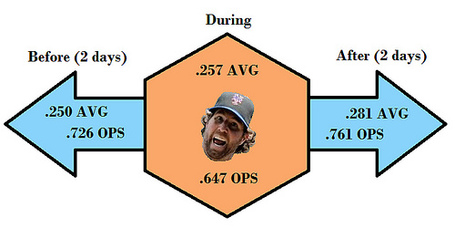 Seems like Jerry's gut was off on this one (gasp!); in actuality, lineups have actually improved after facing off against Dickey and his knuckleball.  That is, in terms of AVG & OPS, while walks, strikeouts and the number of pitches seen remains relatively consistent.  Now chances are this has nothing to do with Dickey and almost everything to do with the fact that Dickey has almost always been followed by Hisanori Takahashi.  Now maybe the knuckleball does have some minute residual affect (positively or negatively) on the batters but there are just too many variables in play here to ever effectively measure that.  But according to these numbers the old adage is seemingly true, your momentum is only as good as your next day's starter.

Obviously we could test this hypothesis to a far greater and more meaningful extent by looking at the career game logs of guys like Tim Wakefield or Charlie Hough (and maybe at some later date I will).  But for now, I just wanted to keep this short, sweet and most of all Dickey.