Any excitement generated by the reunion of the Varsity lineup was quickly quashed by a disastrous Mike Pelfrey outing. In his worst start of the year (and that's saying something) he last just 1.1 innings, allowing six runs on seven hits. He had been due for some more ERA regression but that is not the only problem here. Dead arm, stiff neck, another unknown injury -- something is wrong.

I stopped watching after Mark Reynolds hit another 400+ foot home run off a replacement level Mets pitcher, in this case Fernando Nieve. He victimized Brian Stokes, Nelson Figueroa and Livan Hernandez last year. Monday's homer came in the sixth inning and made the score 11-1. Here are the positives from the game:

That's about it. Jose Reyes had two hits but also committed two errors. Forget about this one and move on. The Braves were idle Monday night and the Phillies lost, so the Mets are 5.5 games out of first place in the NL East and 2.5 games behind Cincinnati in the Wild Card. Staff ace R.A. Dickey faces Barry Enright Tuesday night.

Unintentionally sexual quote of the game: "You have to widen your stance and use your hands." - Ron Darling 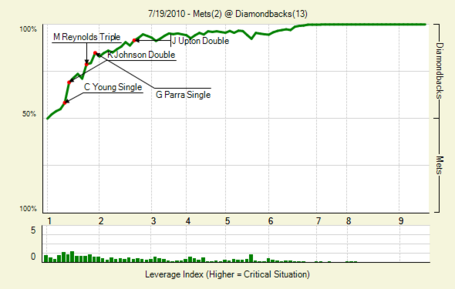