Diamondbacks 4, Mets 3: You're Doing It Wrong

Share All sharing options for: Diamondbacks 4, Mets 3: You're Doing It Wrong

It didn't have to happen this way. It might've happened anyway, but not like this. The only explanation for allowing Oliver Perez to pitch the 12th inning and, after narrowly escaping that fame, to start the 13th inning as well, and to bring in Fernando Nieve to finish things off, is that Jerry Manuel actually thought it gave the Mets the best chance of winning the game. That need be the only consideration on almost any night, particularly after losing five of six to begin the second half and trying to avoid being swept by the last-place Diamondbacks. It can be distilled to a very simple question:

Is using Oliver Perez and then Fernando Nieve here our best move? Would we be more likely to win by bringing in someone else?

Okay, two simple questions, but one strikingly simple point. What possible rationale could you have for using your very worst pitcher instead of arguably your best? On a night when your two closest rivals have already lost, in the middle of a road trip that could wind up burying your season, you have your best reliever just a phone call away and instead you raise a creaky left hand and signal for Oliver Perez. Oliver Perez! Whatever you're doing there, you're doing it wrong. You are a bad manager. You are Jerry Manuel. 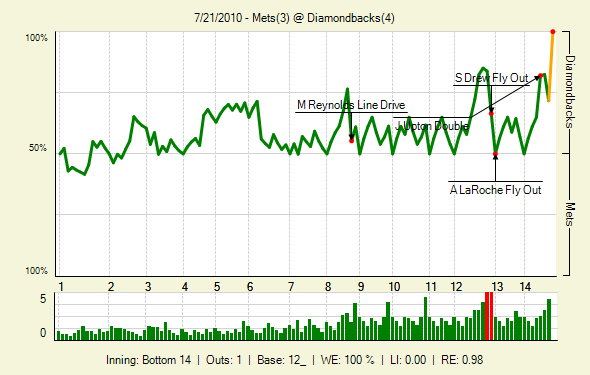 Nice job by isles732; his effort in the game thread embiggens us all.