Dodgers 2, Mets 0: Your Offense Is Offensive

Share All sharing options for: Dodgers 2, Mets 0: Your Offense Is Offensive

Another game, another inept performance by the Mets ending well past midnight (on the east coast). That makes 21 runs scored in the last 12 games. The Pirates scored 15 in one game yesterday. I wish I could say it's bad luck, but the plate appearances have been atrocious. Strikeouts, pop-ups, hacking at garbage out of the strike zone -- wasn't the All-Star break supposed to re-energize everyone? Mets batters' walk rate by month:

I'm no scientician but that's a poor trend. It's at 7.8% for the season, second worst in the league.

Hisanori Takahashi pitched well -- seven innings, five hits, two runs, two walks and five strikeouts. The Dodgers' lineup isn't fearsome but Tak2 gave his team a great chance to win. No one else did anything worth pointing out, so I'll just end it there. I will note that our superstar center fielder's return from injury is being cited by some as a reason for the Mets' recent struggles. Blaming good players for the suck is ignorant, but if we're playing the correlation = causation game, I'll give it a shot:

Is it a coincidence that the Mets’ overnight change from a fighting, tenacious team to a bunch of sleepwalkers began when the BP oil leak was capped? Uncap the leak!

Here's a picture to cheer people up, via @GregFertel: 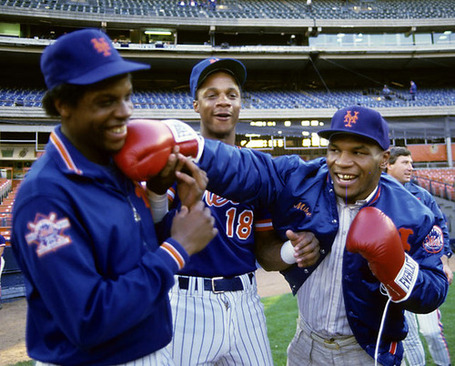 UPDATE:  Fernando Nieve has been DFA'd, per SNY. Manny Acosta flew to California according to Adam Rubin, so that seems like the corresponding move.

Unintentionally sexual quote of the game: "Pagan has found a home in that two hole." -- Ron Darling