One of the memes coming from the front office these days is that they aren't sure that someone like Ted Lilly is an upgrade, stuff-wise, over Hisanori Takahashi, their current fifth starter. They've also expressed reservations about Lilly's reduced velocity this year, which is just another way to say the same thing. This should be easy enough to judge using the current statistics at our disposal.

The velocity dip was marked early on in the season, and coming off of surgery, concern was high. It is still an issue, but as you can see from this fastball velocity chart from FanGraphs.com, he's working his way back currently. At least, his four best games by fastball velocity came in his last eight games overall. 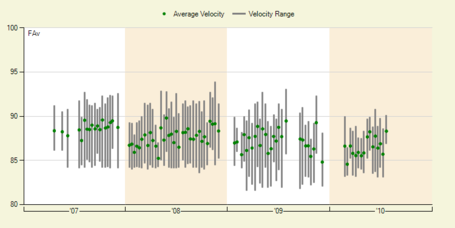 Also concerning has been Lilly's gradual conversion into an extreme fly ball pitcher. After sporting groundball rates in the high 30s back with the Blue Jays, Lilly now has a minuscule 29.4% groundball rate. That's the second-worst number for qualified starters in the major leagues, and it makes Takahashi's 36.1% number look robust. Even if you point out that #3 on the list, Matt Cain, succeeds by playing in a park that fits his style, you have to admit that Tak-san is also a fly-ball pitcher, and that a walk or so every fifth game is probably not worth the cost of a prospect.

To try and get a little closer to process, let's take a look at their Pitch Type Values, or a linear weights system at FanGraphs that tracks the results of each pitch on a game-state level. In other words, if there's a guy on second, and no outs, that's worth 1.189 runs across baseball. If Lilly throws a fastball, and the guy flies out to right, that same guy on second base with one out is worth .725 runs. These numbers are found by asking "how many runs are scored in this game state, on average."

Lilly's fastball is a double-digit pitch (15.4 runs, positive is good on FG) despite the drop in velocity. His normally robust slider (+36 runs career) is in the negative (-3.5) for the first time in five years, though. While the curveball may set up a lot of things, it's not a good out pitch judging by his career run value (0.3), so maybe it's not a big deal that Lilly is throwing it at a career-low level. It's too bad that he uses the curveball 23% of the time during 0-2 counts, and 19% of the time during 1-2 counts - he is trying to strike people out with it, and yet he's got the worst strikeout rate of his career and the the pitch is running at scratch level according to linear weights.

Takahashi, on the other hand, owns a negative fastball (-6 runs), but his second-most used pitch, the changeup, is actually pretty nice (+6.8 runs). So is his slider (+2.5 runs). The curveball and cutter are negative/scratch, but he only throws them 9.6% of the time combined if the BIS classifications are to be believed. His most-used out pitch is the changeup (38% on 0-2 counts; 39% on 1-2 counts), so it's nice to see a positive classification for his out-pitch.

Let's dig a little deeper and look at their whiff rates. Lilly is getting his career lowest swinging strike percentage (7.6%), while Takahashi has a nicer number even as a starter (10.2%). The average this year is 8.4%, so we have one guy above the mean, and one guy below. Somewhat surprising actually.

Lilly has the track record, but he doesn't look like a clear upgrade this year. Perhaps bullets should be saved to upgrade the bullpen, unless Lilly is actually cheaper than a bullpen option in terms of prospect costs. If that's the case, he could probably give a similar performance to Takahashi, who we know is pretty good in the pen. One last note of caution, though: In high-leverage situations this year, Lilly has been terrible (15.61 FIP), and he's been giving up close to three homers per nine in July.

He certainly doesn't look like a pitcher worth a good prospect, Omar. Please don't overpay.