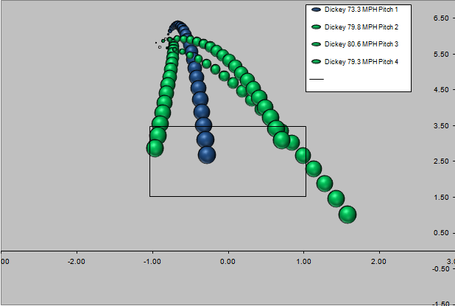 At this point, it should be clear that the Mets owe a lot, if not the entire season, to R.A. Dickey's ace-like performance.  RA's is fun as hell to watch. He throws one pitch roughly 83% of the time (the knuckleball) and his other pitch (his fastball) is perfectly mediocre.  Now to be fair, it's not as if the knuckleball is a typical pitch; as you can see on the graph below (and in my prior article on Dickey), the pitch has the ability to move in any of the four normal directions "up" down, in, or away.  Thus a hitter, knowing that a knuckleball is coming, really doesn't know anything whatsoever about how the oncoming pitch is going to move. 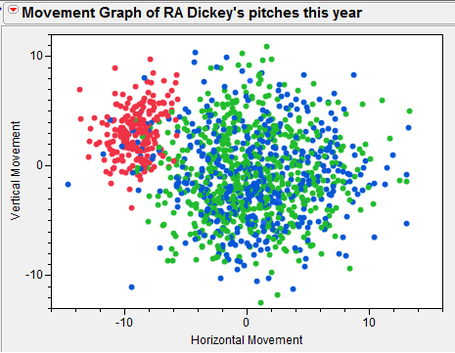 Figure 2:  The Movement Graph of Dickey's Pitches this year.

Of course, Dickey has no idea where his knuckleball is going to go either. But that doesn't mean that the knuckleball is simply a pitch you can fire-and-forget. Dickey does control one aspect of the pitch, its speed.  Dickey, as you may have heard in articles or just through GKR's commentary, throws both a soft slower knuckleball and a "hard" faster knuckleball. What's especially interesting is how he uses these two-speeds and how effective each speed has been.

*The cutoff point was not set arbitrarily if anyone's curious. I looked at the amount of knuckleballs thrown at each velocity and found that the resulting graph results in a bimodal distribution and the midpoint between the two peaks is roughly 76MPH.

** One obvious caveat here about this analysis is that I cannot tell from this data what Dickey's INTENTIONS are with each pitch. It is totally possible (and fairly likely) that several of the pitches I have classified as "slow knuckleballs" were intended by Dickey to instead be the harder, faster variety. That said, this shouldn't have much effect on the findings of this article.

First let's look at how Dickey tends to use these three pitches:

Table 1:  The breakdown of Dickey's pitch selection by count as well as the average speed of knuckleballs thrown in a particular count. I've bolded for emphasis any knuckleball %s 50% or higher.

This chart shows the breakdown of Dickey's pitch selection based upon the ball-strike count.  What we can see here is very interesting. When Dickey is either falling behind a batter or it's a 0-0 count, he uses the slow knuckleball most of the time. Thus, on 0-0, 1-0, 2-0, and 2-1 counts, if Dickey throws a knuckleball it will be of the slow variety.

However, if Dickey is AHEAD of a batter, he switches to the fast knuckleball. Essentially, it seems that the fast variety of the knuckleball is what he considers his out pitch.  And when it comes to certain very pitcher friendly counts, such as 0-2, 1-2, 0-1, and 2-2, he nearly ALWAYS is going to throw the hard knuckler. If you look at the chart's last column, you can see that on 0-2 and 1-2 counts, he manages to get his knuckleball on average to be above 79MPH, which is really really fast for a knuckleball.

Incidentally, a great example of this sort of pitch selection can be seen in the graphic on the top of this article. That's the four pitches he threw to strike out Matt Kemp in his last start. The first pitch (in blue) was a slow knuckleball taken for a called strike.  The next three pitches were fast knuckleballs that Dickey used to finish off Kemp, which he did so successfully.

Now, why has Dickey used the fast knuckleball more or less exclusively in these pitchers' counts? Well to see that we need to look at the effectiveness of Dickey's three pitches.

Table 2:  Performance of Dickey's three pitches this year. Once again, do note that for RVAA, the more negative the value, the better for a pitcher.

*This category does not mean that all of these pitches were not called for balls. For example, on slow knuckleballs, Dickey actually gets called for a ball 38% of the time, the most by a good bit of any of his pitches. The reason seems to be that low knuckleballs in the zone are being called balls more often than they should.  Still, I figure such umpire errors will even out over the long run and come closer to the In the Strike Zone %s.

Now this paints an interesting picture. Before I talk about this chart, I need to be clear on one point: Don't overvalue the first two columns. Yes, Dickey's fastball seems to be an amazing pitch; in fact FanGraphs (which has slightly different numbers than mine) has it as the 2nd best fastball in baseball. But the reason for that should be obvious:  Dickey's fastball is so "effective" because he 1) uses it on counts when a hitter is unlikely to swing, so it's not punished very often and 2) uses it so infrequently as to surprise hitters expecting the knuckleball. So don't go looking at this chart and start asking why Dickey doesn't throw more fastballs.

STILL, despite the last two paragraphs, it is pretty clear from the table that the fast knuckleball has been VERY effective this year and is certainly a better pitch than the slow knuckleball. Dickey's Whiff % (the amount of times Batters miss when they swing at a pitch) for the fast knuckleball is very good, making it perfect for an out pitch.  Moreover, Batters swing at the pitch pretty frequently, though that might just be because Dickey throws the pitch most often in 2 strike counts, where batters are more likely to swing. Moreover, the pitch gets a really good ground ball rate of 58.2%, which is not just better than his slow knuckleball by quite a bit but is just really really good in general. The end result is that Dickey is able to use the pitch so that even if batters DO make contact, they aren't able to get extra base hits.

It's amazing the success Dickey has had this year, but this analysis makes it clear how he's doing it: He's been getting hitters into good counts by throwing the soft knuckleball when hitters are more likely to take a pitch and then is surprising them with the hard knuckleball. So I guess the only question might be: Can he keep doing it?

I'm going to say: Yes, he can. It'll be hard for hitters to adapt to the faster knuckler because A) it's movement is still unpredictable and B) I think it's harder for hitters to adjust from scouting reports to the idea that a pitch will be five MPH faster than to simply adjust for a certain pitch always being in the same location. Moreover, while he's never had this much success before, his pitching is clearly different this year. Last year he was less accurate with his knuckleball (63% In Zone rate compared to over 70% this year) and just as importantly, he didn't have the ability to change speeds as effectively. While last year he seemed to be able to throw a little bit harder knuckleball in good counts, it wasn't a clearly distinct separate pitch from his slower knuckleball. This year it is a distinct separate pitch, and it's allowed him to beat hitters like he could never do before.

Knuckleball pitchers are unpredictable, and it's certainly possible that RA will have a string of starts where he can't find the zone. But I'm sure, as sure as I can be with a knuckleballer, that RA is likely to still be a pretty good pitcher for the Mets this year and maybe for the future if we can lock him up for a few more years.