Share All sharing options for: Mets Buyers Or Sellers?

Every year it seems, the Mets fanbase has to debate if the team should be buying or selling. All sorts of yammering goes into the process. The thrust of the arguments usually start with the standings, but the real questions should probably be about windows. As I hinted in this piece about living in the moment, non-Yankee teams need to be able to frankly look at their talent and make a push when their cheap young players are in their peaks.

So, do the Mets have cheap young talent? Sort of - David Wright, Jose Reyes, Ike Davis, Angel Pagan, Mike Pelfrey, and Jonathon Niese are all controlled at rates that are cheaper than the market. That's your young core, ladies and gentleman. Though it's not all that young, they are mostly in their peak age ranges currently. Let's take a look at some key indicators for this team as it assesses their needs this trade deadline: 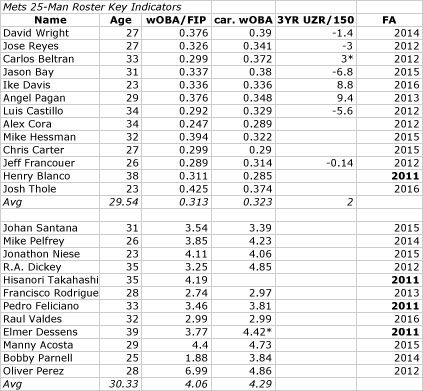 Mets batters are 29.54 years old on average, and the average age in the National League is 29. But you also have to look at the teams in the division, so you'll see that Philadelphia is obviously older (32), while Atlanta (28.7) and Florida (27.3) are younger. Washington (29.5) is the same age, but given their minor league system and the fact that they just traded Christian Guzman and are looking to trade Adam Dunn, it's fair to rate them as younger. Given their batting age, you'd think that the Mets are more of a win-now team.

The pitchers, drawn up by R.A. Dickey, Elmer Dessens and Hisanori Takahashi, are a tad bit older at 30.33. The average NL pitcher is 28.9, but in the division, we've got some older pitchers. Atlanta (30.5) and Philadelphia (31.8), at least, are older than the Mets. Once again, Florida (27.1) is as young as you think it is. Washington shows its youth in pitching (27.9), so they are doing a good job of building a young team down there. Once again, the Mets look like a win-now team.

There is a caveat. Look at the free agency years for this team, and you'll notice that the team does not lose a real important cog until 2012. This year, only a handful of relievers and Henry Blanco will be on their way when the season comes to a close. 2011 is not the expiration date on this team - 2012, on the other hand, sees a large decision about Jose Reyes looming, as well as the end of Carlos Beltran's (mostly excellent) deal. I've included all options and arb years as if the team will continue to employ the player - obviously Jeff Francouer is a non-tender candidate.

The first version of this chart had a nebulous sixth column regarding the team's health. In the column, I had an up arrow or down arrow for their health, but it was based only on intuition and didn't make enough sense to include. However, if you look up and down this lineup, you see enough injury risk that you understand that health has to be a big part of the decision to buy or sell.

If you think that the team is lucky to be as healthy as they are right now, then now is the time to buy. But, watching Carlos Beltran play right now, that's an iffy proposition. If you think that he'll be healthier next year, and Reyes, Wright, Niese, Pelfrey and Pagan will all be equally healthy next year, then 2011 is the year to go all in at the poker table that is the National League East.