Share All sharing options for: Mets Month in Review: June

Hey! A month in review that's relatively on time! How novel. You can find our last installment here and April's here.

The Mets had a rough May, but to call their June an improvement would be an understatement. They went 18-8, to jump up from a tie for third to sole possession of second, some outstanding play by the Braves being the only thing keeping them out of first. This chart does a great job of illustrating just how well the Mets played over the course of the month: 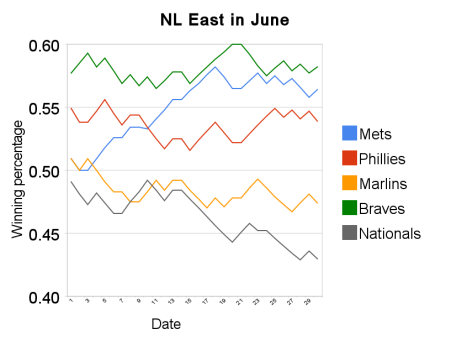 You could subtitle that chart "The Rise of the Mets and the Fall of the Nats." The Braves did hold first place for the duration of the month, but the Mets came darn close a couple of times (and held first for a brief-but-glorious couple hours at one point). But let's look a little deeper into the Mets' performance and compare their actual winning percentage to their pythagorean winning percentage and their predicted winning percentage by BaseRuns: 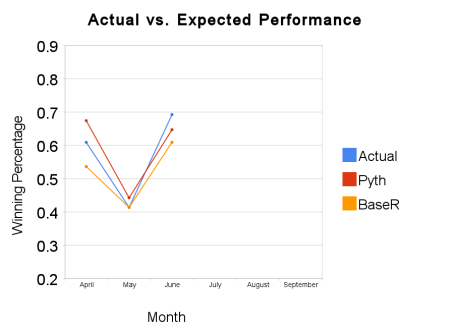 In April, the Mets played pretty well but appeared to play a little over their heads according to Base Runs. The next month, they performed exactly as well as they played, falling off tremendously. There was no reason to expect a dramatic improvement in record without a dramatic improvement in their talent's performance. Which happened in June. Now, the Mets didn't really play like a .692 team, but they team play like a team north of .600 (at the least), which is pretty impressive in and of itself.

In terms of competition, it was kind of an up-and-down month without much in between. The Mets saw some very bad teams in the Orioles and Indians, but good teams need to slap the dregs of baseball around, and the Mets did just that, sweeping the six games. And they more than held their own against teams like the Marlins, Tigers, Padres, and Twins, none of which are bad. The one blip came against the Yankees, which is certainly understandable. Comings, goings, and owies:

I had completely forgotten that Omir Santos had been briefly activated. It's certainly a more vibrant team now than it was at the beginning of the month.

Remember: all the defensive data is for the season to date (through July 4). Defensive data is so unreliable in small samples that FanGraphs doesn't even offer it, so I'll be providing full-season data throughout the season. For those who aren't familiar, RZR is Revised Zone Rating, and UZR/150 is Ultimate Zone Rating per 150 games. The Mets continued to slide according to RZR but also continued to rise according to UZR, which is a little interesting. To my eyes at least, the Mets' defense appears to be improved, so I'll side with UZR, which is probably a little more reliable anyway. As for offense, the Mets' slugged a lot more while holding their OBA steady, which turned into a seven point increase in their team wOBA. It's a big reason why the team went 18-8 in June.

Here's each individual player's contributions plotted by his UZR/150 and his wOBA. Again, catcher's "UZR/150" doesn't include any range numbers, just stolen base data per 150 defensive games, and the UZR numbers are for a player's primary position only (there's virtually nobody where adding additional data makes a substantial difference anyway). Here you go: 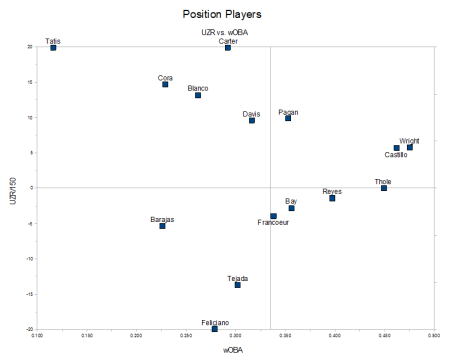 Click to embiggen. As always, you generally want to be up and right. A few thoughts. One, the Luis Castillo data is for an extremely small sample, so feel free to pretend that isn't there. Two, Gary Matthews only had one plate appearance where is wOBA was .000, so he's literally off the chart. Three, David Wright is awesome (he hit over .400 over the month). Four, a couple of Mets improved substantially defensively over the month, namely Wright, Davis, and Cora. Five, UZR doesn't think much of Tejada's defense, although it's still very early.

The strikeouts fell off a cliff, but so did the walk rate, and the departures of Oliver Perez and John Maine are the biggest reasons for that. Takahashi and Dickey are closer to finesse pitchers, so it stands to reason that strikeouts and walks would both decrease. And like last month, the net result was pretty much a wash in terms of xFIP, which has been incredibly stable, month-to-month. Here's how the starters have performed on an individual basis: 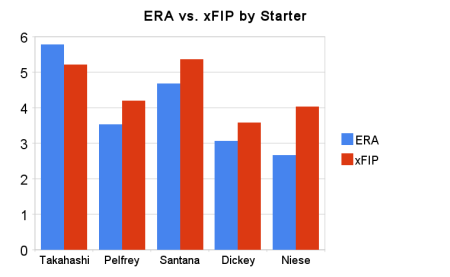 You generally want the red column to be lower, or at least equal in height to the blue. Niese was luck's primary beneficiary in June, but he still had the second-lowest xFIP on the staff. As disappointing as Santana's June was, it's made worse by the fact that he deserved a fate even worse than the one he received.

And here's one more graph for the rotation, this one a start-by-start comparison of each starter's game scores, just so you can get a feel for how each guy's month went: 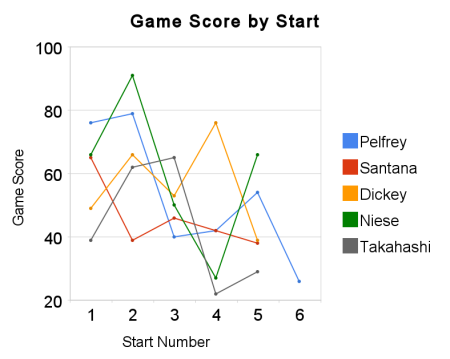 It was a dramatic improvement from May to June. In April, the Mets' bullpen ERA was incredibly low, but then they were more lucky than good. That wasn't the case in June. The cadre posted a season-high in strikeout rate, a season-low in walk rate (shaving two walks off!!), and the home run rate was sustainable. Hell, their BABIP was higher than exptected! And while their xFIP was still much higher than their ERA, the xFIP was the fourth-best in the NL during June. The bullpen earned their keep last month. 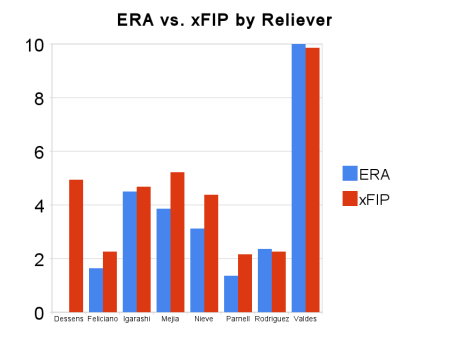 K-Rod, Parnell, and Feliciano were legitimately awesome. And that's it for this installment. See ya next month.