Braves 4, Mets 2: A Couple Of Late Jacks Do Dickey In

Share All sharing options for: Braves 4, Mets 2: A Couple Of Late Jacks Do Dickey In

In a game they never led and eventually lost 4-2, a couple of late home runs and the requisite objectionable decision-making sent the Mets careening to their sixth loss in ten games and a four game deficit in the NL East. What's more, an improbable comeback in Philadelphia leaves the Mets just a game and a half ahead of the Phillies.

Against one of the best pitching staffs in baseball, Jeff Francoeur made four outs on just six pitches. Six. And if you think I needed some numerical trickery to come up with that number -- like only counting the pitches that ended at-bats -- think again. Nick Evans, who doesn't even really exist except as a character in blurry polaroids, saw five pitches in one at-bat. Frenchy saw six pitches all night and is in a downhill tumble towards a .300 on-base percentage; it currently rests listlessly at .306.

R.A. Dickey was good through the first six innings but ran into trouble in the seventh -- those two home runs by Melky Cabrera and Omar Infante -- that served as his and the Mets' demise.

Whatever their trade deadline plans are, the Mets might consider looking into a second baseman who can hit a little. Ruben Tejada might be a wizard with the glove but his OPS is barely .550. That's not a misprint, either. He's a kid and he's batting eighth, but if his OPS were really his slugging percentage he'd still only be sixth in the league. Dan Uggla might be a total butcher in the field but he has a .375 wOBA; Tejada's wOBA entering the night was .255. Dickey is at .226. With Francoeur, Tejada, and Pitcher comprising the last three spots in the order on a nightly basis, you're talking about well below replacement-level offense from a third of your lineup, which is often an insurmountable number of outs to be throwing away.

The Mets are also getting very little offense from Ike Davis, who was hitting .289/.397/.485 on May 20 and made everyone forget that first base was ever a problem for this team. That was seven weeks ago, since which he has batted just .238/.293/.393 in 181 plate appearances. Interestingly, he hasn't struggled against lefties as many anticipated, but he has basically stopped drawing walks altogether. He has just eight walks in his last 157 plate appearances (5.1%) after drawing 22 walks in his first 140 plate appearances (15.7%).

Mike Pelfrey takes on Tim Hudson at 4:10pm on Saturday and, regrettably, the game is on FOX. 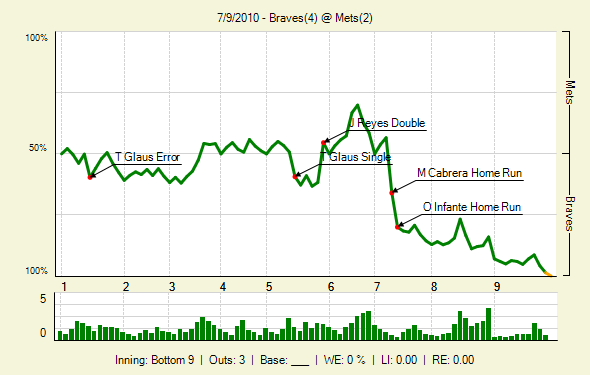