Share All sharing options for: Diamondbacks 14, Mets 1: Hall Of Lame

Through 3.1 innings, Jon Niese didn't allow a hit or walk and notched two strikeouts. Thoughts of the franchise's first no-hitter danced in the heads of some fans, on Mets Hall of Fame induction day no less. Then, with one out in the fourth, Kelly Johnson walked, Justin Upton broke up the no-no with a single and it was all downhill from there. Adam LaRoche followed with a three-run homer and added another in the very next inning. The terrible twosome of Elmer Dessens and Oliver Perez combined to allow seven runs in 4.2 innings in relief of Niese. Dan Hudson shut down the Mets' bats, allowing just three hits in his eight innings of work. In seven games at Citi Field over the last two seasons, the Diamondbacks have cracked 13 home runs. There's not much else to say. In lieu of more commentary about this uninspiring debacle, here is a recap of the Mets' 5-2 win over the Cardinals on September 22, 1986. Congratulations to Frank Cashen, Dwight Gooden, Davey Johnson and Darryl Strawberry for their enshrinement into the Mets Hall of Fame.

In his first start after tossing a complete game in the Mets' division clinching win against the Cubs on September 17th, Dwight Gooden showed no signs of letting up. In a two hour, twenty-six minute game, Doc allowed just two hits and one unearned run, while striking out eight and walking a lone batter. It was a dominating performance, and one that typified the Mets' show-no-mercy attitude this season. An 18 game lead in the NL East, with the playoffs clinched? That doesn't matter when the hated Cardinals come to town. Davey Johnson fielded his "A" lineup against Bob Forsch, and I expect the same when the Mets go for a two-game sweep of this mini series tomorrow.

Darryl Strawberry was the hitting star, going 2-for-4 with a home run, double and two runs scored. His solo shot in the fourth inning gave the Mets a 2-1 lead, a lead they would never relinquish. Darryl has swung that bat well the last couple games, so hopefully he can finish the regular season on a hot streak. Doc helped his own cause, singling in an insurance run in the sixth inning

Wally Backman smashed his first home run of the season, on his birthday. Touch 'em all Wally, you deserve it! I hear the after party is at Finn MacCool's in Port Washington. Bottoms up!

The pitching matchup tomorrow is Bob Ojeda vs. Greg Mathews. Look for Tim Teufel to start vs. the southpaw Mathews, and Lee Mazzilli to spell Len Dykstra in the outfield. 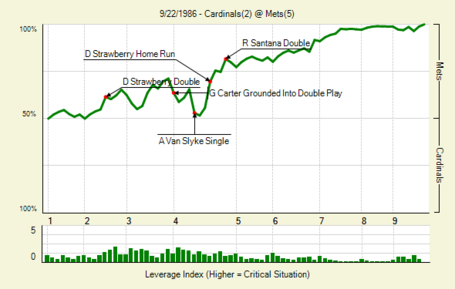