I don't even know what this means, but I guess it happened tonight.

K-Rod in altercation in family lounge, physically removed by security.

I have no idea who the altercation was with, what it was over, or what the repercussions will be, but I like to think it involved Rodriguez strangling Jerry Manuel Homer-Simpson-style for passing him over in lieu of Manny Acosta in the top of the eighth tonight.

Update: Rodriguez apparently got into a fight with his father-in-law. Well, we've all been there, sister.

Update #2: Even though it may not reflect actual events, if someone wouldn't mind MSPainting Frankie choking Jerry onto a picture of Homer choking Bart, well that might just make my night.

Update #3: The Mets have issued a statement.

"There was an incident between Francisco Rodriguez and his family tonight at the ballpark. He was questioned by police and all other questions pertaining to this incident will be referred to the police department."

Update #5: Per Ken Davidoff, a police spokesman has said that Rodriguez "will be charged with third-degree assault for attacking his father-in-law." 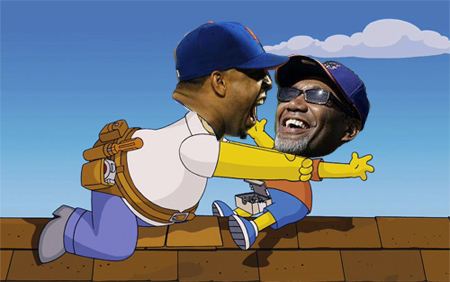 Update #7: The Daily News has a photo of an unidentified man presumed to be the father-in-Rod being taken away from Citi Field on a stretcher. He's sitting up, though. Seems fine. Not really interesting or newsworthy. We should all be asleep, but instead, this.