The poll is closed. If you answered "no", you are correct. Your prize is four more years of Omar Minaya. 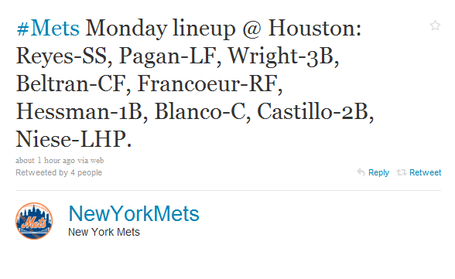 The 2010 New York Mets' motto is "rush unpolished prospects and sit them on the bench".

Twenty-one year old prospect Fernando Martinez has not started the last two games, and has started just four of eight games since being called up. Setting aside the wisdom of the initial decision to promote him to the big club, Martinez absolutely must play everyday, no matter the level at which he is competing. Maybe off days against tough lefties would be advisable. But in typical Mets fashion, Jerry Manuel decided platooning Martinez with Jeff Francoeur, a player with no Mets future beyond 2010, was a good idea.

Tonight in Houston, the Mets will face the solid left-handed pitcher Wandy Rodriguez. Will Fernando Martinez be in the starting lineup? I say yes, actually, considering Carlos Beltran has started five games in a row and could use a day off. Given Beltran's production he is probably in Jerry's doghouse. An outfield formation of Martinez in left, Angel Pagan in center and Francoeur in right seems likely.