Marlins 5, Mets 4: Schwing And A Misch

Share All sharing options for: Marlins 5, Mets 4: Schwing And A Misch

Is anyone else disappointed in themselves for getting a little excited there?

The Mets trailed from the first inning on, but rallied to score two runs in the seventh to cut the deficit to 5-3. An RBI triple by Ike Davis chased home David Wright and Jeff Francoeur followed with an RBI single that plated Davis. Manny Acosta and Bobby Parnell held the Marlins at bay in tops of the eighth and ninth innings, setting things up for bottom-of-the-ninth drama for the second straight night.

Wright led off with a mighty blast over the center field wall off of closer Leo Nunez, narrowing the score to 5-4. I got out of my chair and stood there watching like a slack-jawed goon as if the game meant anything. The odds were still long on a Mets comeback, but things were percolating and I wanted to be in proper celebrating position should the unlikely somehow happen.

With none out and down a run, Davis came to the plate with designs on doing something special. Unfortunately, Davis had already reached his one-hit limit with the aforementioned eighth-inning triple, so he reluctantly popped out to second for the first out of the ninth. Francoeur, showing blatant disregard for the agreed-upon "one hit" rule bounced a single to center for his second hit of the game. A Josh Thole single moved Francoeur to second with the would-be tying run, and a Mike Hessman ground out left runners on the corners with two outs and Luis Castillo, Tuesday night's hero, approaching the dish.

Castillo cut right through the tension with a four-pitch walk to load the bases, leaving the game in the hands of Jose Reyes. As "Jose, Jose, Jose, Jose"s rained down from the seats above, Reyes took a first-pitch strike from Nunez and grounded the next pitch meekly to Gaby Sanchez at first, who flipped it to Nunez for the game's final out.

I sat down, humbled and nonplussed. I'm still not sure why I stood up in the first place; I had to know it would end like this. 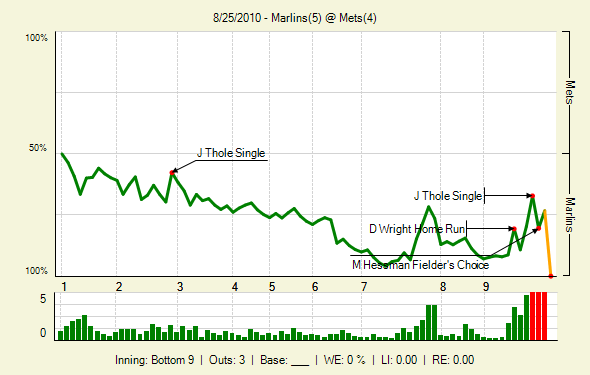