Share All sharing options for: Mets Run Scoring Since The All-Star Break

Much has been made of the Mets woeful second-half offense, and if you'll indulge me a moment I'll make slightly more of it. First, pretty graph. 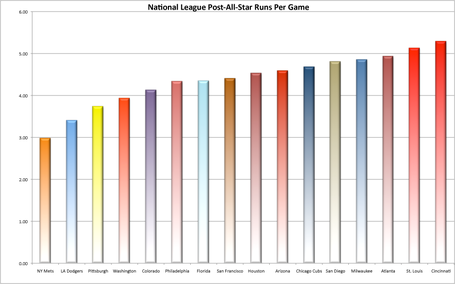 Next up, the corresponding runs-scored data that told the gremlins inside Excel how to make that graph.

In a word: woof! The not-so-secret key to winning baseball games is to outscore your opponent, and that can be accomplished, generally, either by scoring lots of runs or allowing very few. Or just being above average at both. The point being that low-scoring teams can certainly be winning teams, but it sure helps if you can score a bit, and it's a rare team that makes the postseason while carrying the lowest-scoring offense in the league. The reason for that should be obvious: Take the best pitching staff and the worst offense and you should wind up with something around a league-average team. To wit: the Mets have the third best ERA in the National League since the All-Star break and have been a .500 team for the past month.

The numbers above don't reflect Sunday's games, so the five-spot the Mets hung on the Astros likely vaulted them above the three-runs-per-game mark, but it should still keep them well below the 15th-place Dodgers. If we use the Mets full-season run-scoring pace, they are on track to score 648 runs by season's end, which would be the lowest since the Art-Howe-led 2003 team scored just 642 runs. However, if we use the Mets second-half run-scoring pace of approximately three runs per game, they would wind up with just 614 total runs at the end of the season, which would be the lowest since the Jeff-Torborg-helmed 1992 team plated just 599 runs. Bobby Bonilla led that particular team with 19 home runs and a .779 OPS, unless you count part-timer Chico Walker, who had a .792 OPS in 255 plate appearances.

I suspect the Mets will pick up their second-half pace a bit and finish somewhere between the 614 and 648 runs extrapolated above. Sure, Citi Field isn't doing them any favors, but there's no avoiding the salient fact that this is a bad, bad offensive team. It seems like they should be better, but if you look around the diamond it's no surprise the bats are floundering. They've gotten practically zero offensive production from center field, right field, second base, and first base. That's half a lineup of sinkholes, and you simply can't make up for that shortfall with great starting pitching. The Mets certainly haven't.

We're not yet ready for the 2010 postmortem, but you can be sure that when we are we'll spend plenty of time talking about those four positions and how the Mets can go about improving them for 2011.