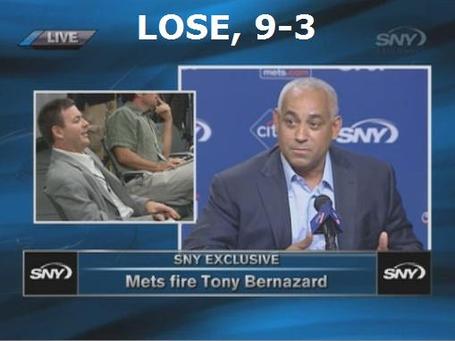 I was actually excited for this game, mainly because FanGraphs told me that Pat Misch profiles as an above average pitcher going forward. League average FIP this year is 4.12 -- league average ERA is 4.08. Mark Buehrle, essentially. That excitement was quickly extinguished, as Misch allowed eight hits and five runs in his three innings of work, including a three-run home run to Jason Heyward. I get that he has great control, but he doesn't strike anyone out or induce groundballs at a significant rate. Projecting Misch to be an above average pitcher is like projecting me to be the next Joe Posnanski.

After Misch was shellacked, Elmer Dessens, Manny Acosta, Oliver Perez and Ryota Igarashi combined to allow four runs on six hits in five innings. It was Ollie's first appearance since August 1st, the longest layoff in MLB this season according to Adam Rubin. Ollie gave up a homer to Brian McCann on the second pitch he uncorked (an 88 mph fastball, one of the faster pitches he threw). I laughed, while lamenting that if he is on the team next season I will seriously consider not rooting for the Mets. At this point in the recap, I planned to screengrab a shot of the SNY text-poll, which asked: "Did the Mets treat Oliver Perez poorly?". However, MLB.TV is on the fritz and I can't access the game. Anyway, the results were 94% No, 6% Yes.  Apparently, 6% of SNY texters were either drunk, relatives of Ollie or simply having a laugh tonight.

Despite uncharacteristically drawing six walks, the Mets lineup couldn't get much going. Chris Carter went 1-for-2 with two walks, but grounded out with the bases loaded and two outs in the fifth inning, when the score was still 5-3. Josh Thole continued to shine, going 1-for-3 with a triple and a walk.

His groundball to flyball ratio was 10:2. Awesome. Andy McCullough thinks Mejia might start Saturday vs. the Cubs at Wrigley Field. Or, more likely, he will become Jerry Manuel's new "eighth inning guy".

Some terrible/awesome Misch puns from the gamethread and comments below:

Heyward gets better of overmatched Misch
Want Mejia instead? You'll soon get your wish 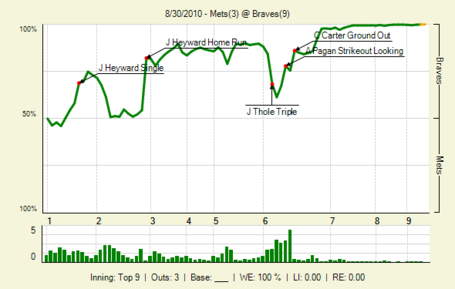