The Mets Are Who The Computers Thought They Were

Share All sharing options for: The Mets Are Who The Computers Thought They Were

Flash back to March 2010 and the release of the season projections. You know the acronyms: CHONE, PECOTA, etc. The consensus projection for the Mets' record is in the 75-80 win range. Vegas is the most optimistic, predicting an 80-82 record. Dave Allen at Baseball Analysts plotted the win projections for NL East teams: 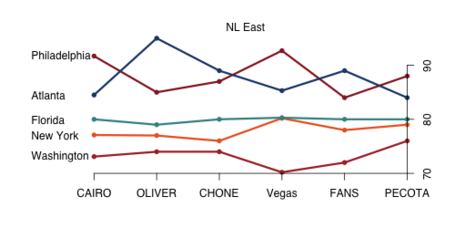 Now return to present day. The Mets' record stands at 54-54, an even .500. Injury hasn't ravaged the team -- the major contributors from the Opening Day roster have barely missed any playing time. Underachievement by the corner outfielders and second basemen is offset by the emergence of Angel Pagan and R.A. Dickey. No significant trades have occurred, so personnel turnover is rather low, except on the fringes of the bench and bullpen. Given the preseason projections, and our knowledge of true talent level variation, the Mets' performance is thus far exactly as expected. Yet lack of effort, playing without "urgency" and mental weakness are being blamed by media and fans for the Mets' problems, based on reading other blogs and fan reaction on Twitter. Maybe I need to stop obsessing over fan perception of the team and its players. Regardless, in the long run, talent trumps everything. If you think this team is at .500 mainly because its players don't have enough grission, then, to quote MFNY, "youah lawst".

If the team is expected to win 80 games, and does indeed win 80, great! The players, as a whole, lived up to expectations. If the desire is to win 90-95 games, then it's management's job to acquire players with the talent level to accomplish that. Barring a minor miracle, the 2010 Mets will not win 90+ games. Faulting the players for not magically discovering 10 more wins is misguided. Don't blame the players. Blame the front office.