Share All sharing options for: Mets Month in Review: July

Another month flies by, and we're down to our last two. Thank God. Month in Review is AA's analysis of the last thirty days. You can find our April installment here, May's here, and June's here.

After an outstanding, 18-8 June, the Mets saw tough times in July. They went 9-17, nearly a complete reversal of their June fortunes. This chart does a great job of illustrating just how "well" the Mets played over the course of the month: 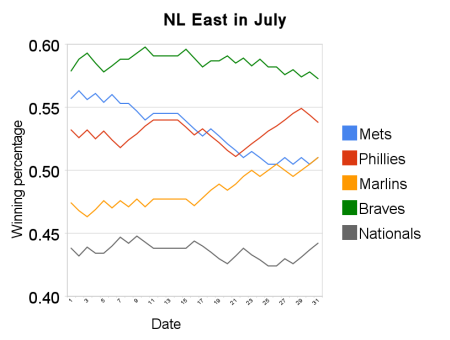 The Mets began the month firmly entrenched in second place, but they began their slide after the season's first week and they didn't stabilize at all until the beginning of the fourth. And by that time, the Phillies were about to go on a run, leaving the Mets to contend with the Marlins for third, and the two teams finished the month tied. Let's move on to the next graph, which compares the Mets' actual winning percentage to their pythagorean winning percentage and their predicted winning percentage by BaseRuns: 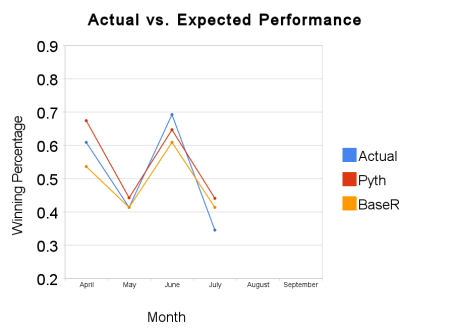 But maybe the Mets just hit some tough teams. An especially rough portion of the schedule could cause a discrepancy of some sort. Let's take a look:

It was a tough month, competition-wise. The only pushovers were the Diamondbacks and Nats, and the Nats aren't really that bad. But the Mets did struggle mightily against those D-Backs, and the tougher teams pushed them around too, save the Cards. Comings, goings, and owies:

Don't blink! You might miss Nick Evans! Let's take a look at the offense and defense.

Remember: all the defensive data is for the season to date (through August 5). Defensive data is so unreliable in small samples that FanGraphs doesn't even offer it, so I'll be providing full-season data throughout the season. For those who aren't familiar, RZR is Revised Zone Rating, and UZR/150 is Ultimate Zone Rating per 150 games. The Mets had a bad month defensively, as both numbers slid from their totals at the end of last month. As for offense, it might be the most pitiful performance I've seen from a Mets offense since I started doing these back in 2006. It would have been comical had we not had to watch it.

Here's each individual player's "contributions" plotted by his UZR/150 and his wOBA. Again, catcher's "UZR/150" doesn't include any range numbers, just stolen base data per 150 defensive games, and the UZR numbers are for a player's primary position only (there's virtually nobody where adding additional data makes a substantial difference anyway). So beware of small sample sizes and keep in mind that the defensive numbers are still for the whole season to date. 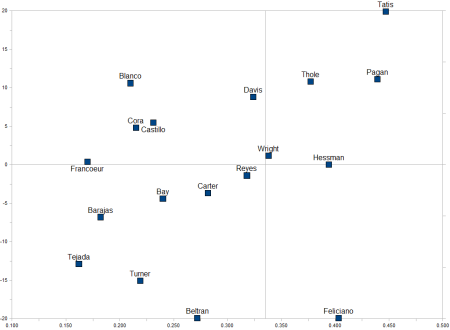 Click to embiggen. As always, you generally want to be up and right. Like I said above, a terrible month for the offense. The only real positives were Angel Pagan and a couple of part-timers. Even David Wright had a month that was the definition of average.

The starting pitching did have a pretty solid month. The strikeout rate rebounded from a poor June, while the other two component ratios held pretty steady. Thanks to the surprising contributions of R.A. Dickey and, to a lesser extent, Hisanori Takahashi, the starting pitching has been a strength for much of a season Here's how the rotation performed individually: 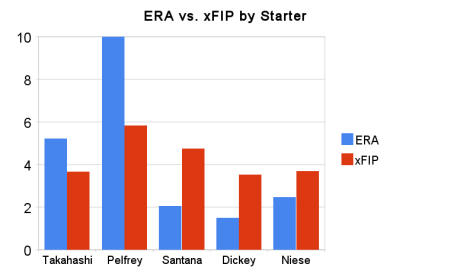 Mike Pelfrey's struggles have been well documented, but it should be noted that his July xFIP indicates that he may merely a bad pitcher instead of the unfathomably terrible pitcher he was. What I found most interesting here was that Takahashi's xFIP was much lower than his ERA, suggesting he might not be much worse than Niese or Dickey.

And here's one more graph for the rotation, this one a start-by-start comparison of each starter's game scores, just so you can get a feel for how each guy's month went: 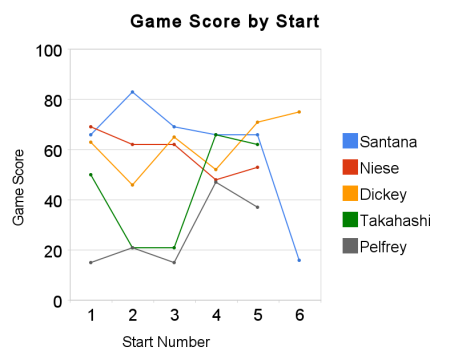 Santana put up a string of very impressive starts before bombing in his final start of the month. Dickey was probably the most consistent starter of the month, while Tak was the most inconsistent. Pelf was just consistently bad.

As you can see, the pitching wasn't a major issue in July; the problems were almost entirely the fault of the hitters. And while the pen didn't have the dominant performance they displayed last month—at least not according to ERA—they still had a good one. 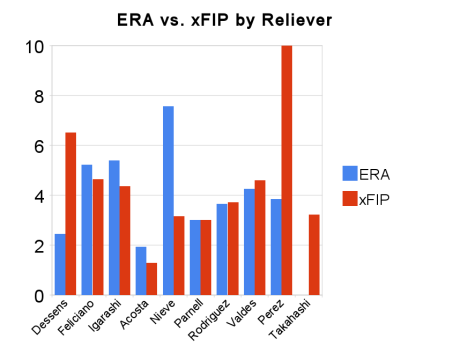 See ya next month.