So apparently RF Fernando Martinez and IF Ruben Tejada will be called up to join the major league club.  Neither is really ready but whatever, didn't stop them the first time around.  Feliciano back down and Cora cut (thank God).

Let's go with joint Stars for the two walk-off heros, Buffalo's LF Lucas Duda & Kingsport's CF ZeErika McQueen.  As I stated, both of these guys ended their respective matches with game-winning homers.  For Duda it was his 14th with Buffalo, 20th overall which is a new career high.  Despite his poor platoon splits (.259 vs. LHP in 2010, .206 career), Duda could absolutely help the major league club as a righty-killer right now; I'd love to see an Evans/Duda platoon.  Unfortunately that's the role Chris Carter is currently playing to some acclaim for the Mets right now.  As for McQueen, it's been a solid season for the '09 29th rounder out of Carthage, Miss.  Though I will say that for a toolsy OF that doesn't yet offer much power, I'd like to see more than just 10 sb's.

On a night where there are PLENTY of eligible candidates, this one goes to the Binghamton 'pen after an atrocious performance in last night's 7-4 loss.  Three B-Mets relievers (Owen, Niesen & Alvarez) allowed all seven of those runs over 1.1 IP directly after starter LHP Robert Carson had been pulled from his best effort since joining the team.  Extra emphasis on Niesen who came in with the bases loaded and walked the only two batters he faced; and to make matters worse, they were both lefties (who are still hitting just .224 against him this year).  Yuck.

It's been very exciting to watch Puello's second half surge which has been nothing short of sensational:

Even better, it seems his newfound hitting prowess may be sustainable as it looks to be coming as a result of some mechanical changes they've made to his swing.  Specifically, they shortened the path of his hands through the hitting zone and brought his lead foot down quicker as well as bringing him farther back from the plate.  So are we witnessing the emergence of a Top 5 prospect right before our eyes?

Well while his speed (44 SB, 9 CS) and burgeoning hitting skills are easy to dream on I'm trying to temper my enthusiasm with Puello as he's still a big-time work in progress.  Here's a simple litmus test I like to use to on Mets prospects:  If this were a kid in another organization would I still be as impressed?  I'm pretty sure I'd say that Puello's improvement is impressive but it's hard to go nuts over a right fielder batting under .300, with one home run and twice as many K's as walks.  If he ever moves to center it'll be a completely different story but as a kid with a big frame, he'll fill out quite a bit and probably won't ever make that switch; it's pretty telling that the Mets haven't ever tried him there beyond one game.

Now the batting average/LD % is on the rise and the plate discipline/K-rate is actually a big improvement over last season so I like to think that as a talented 19 year old he'll keep that up.  But the biggest issue with Puello is that for a corner outfielder with a muscular build he should be hitting more homers.  And a good explanation for his lack of power to this point is in his swing.  Coming into 2010, Puello typically released the bat with his top (right) hand very early on; couple that with a close-up stance and his swing makes more of an inside-out motion, which is great for using all fields but not as great for driving balls out.  Take a look at the video below of Puello knocking a base hit through the middle back in April (you'll probably want to expand the video before viewing):

Notice how most of his swing path is carried by that left hand and he basically leaves his right hand hanging.  Another mitigating factor here is the relatively low loft (AKA line drive) approach he takes, which again is good for pure hitting but not as much for power hitting.  In general, Puello's overall approach has made it tougher to turn on a ball and drive it to his pull side.

To confirm this idea, let's take a look at his 2009 hits on the below spray chart in comparison with another highly touted teenage Mets prospect, Jefry Marte, who is known for his power (keep in mind Puello had only about 200 ab's while Marte had over 400): 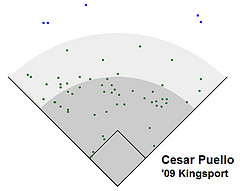 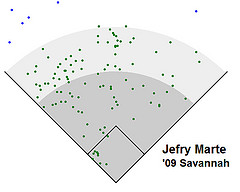 Now it's hard to project someone at any age to jump from 1 home run to upwards of 20 (which pretty much comes with the territory if he's going to play RF).  But the good news is that he's hit a good amount of doubles (in '09 & '10) and in BP he consistently shows the kind of raw strength that has scouts believing those homers will come.  Now will he ever hit 30+?  Probably not, but thanks to a much shorter, more effective new swing/offensive approach I think it's quite feasible for him to turn his 20+ doubles (near the top in the SAL among teenagers) into 15+ homer, foul pole-to-foul pole kind of power one day, especially as he continues to fill out.

As far as where Puello stands among Mets prospects, he certainly deserves to shoot up prospect lists based on his 2010 performance.  He'll certainly push for a Top 10 spot once we put together our post-season list this winter but despite a sudden surge in enthusiasm surrounding his stock, I still hesitate to call him a Top 5 guy.  Although at this point who knows where he'll end up the way he's playing right now.