Braves 4, Mets 1: The Duda And Co. Out Of Their Element Against Hanson

Share All sharing options for: Braves 4, Mets 1: The Duda And Co. Out Of Their Element Against Hanson 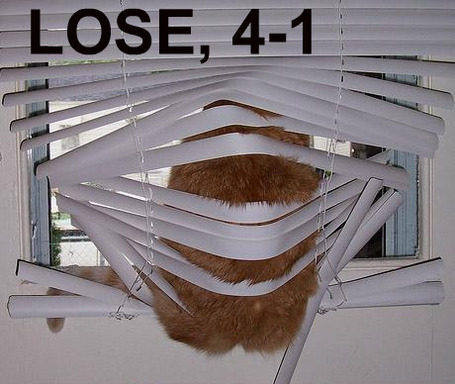 Welcome to Atlanta where the Braves play, and the Mets get got like er'day.

The Mets' offensive struggles continued -- two hits, two walks, one run. Lucas Duda went 0-for-3 with a strikeout in his mildly hyped debut. Two Braves batters individually out-hit the entire Mets lineup. Quoth Keith Hernandez: "It's a little depressing". On a positive note, David Wright hit a double and is no longer 0-for-Atlanta this season. Chris Carter stole his first MLB base.

Mike Pelfrey stumbled through five innings, throwing just 46 of his 83 pitches for strikes (55%). His season rate is 63%. He allowed nine hits and all four runs. Pedro Feliciano, Bobby Parnell and Hisanori Takahashi each tossed a scoreless inning.

Oh, and here is your Amazin' Avenue moment of zen:

In related news, Kevin Burkhardt sent the most texts tonight since the Kris Allen vs Adam Lambert final on American Idol. I'll stop talking about Francoeur when everyone else does. Hopefully it will die down, and people will no longer accuse us of disliking Francoeur, human being, as opposed to Francoeur, baseball player. To reiterate -- if you are/were a fan of Frenchy and are put off by any criticism directed his way because you like fun players with affable personalities, that's fine. You may enjoy going to the ballpark and rooting for guys like that, regardless of how good the team is. If so, terrific. To each his own. But don't go bitching and moaning about another fourth place finish, thanks in no small part to the Mets receiving the worst offensive right field production in the league.

The Metsies look to avoid the sweep Thursday night, featuring a battle of aces: Johan Santana vs Tim Hudson. 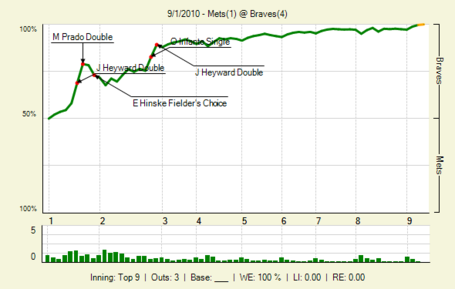