Share All sharing options for: An Interview With Former Mets Catcher Ed Hearn 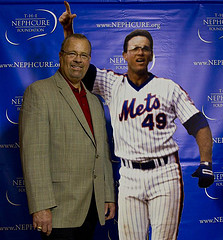 For some reason we fans always seem to save a soft spot for the backup catcher, especially during the winning years. I guess the gritty, grind-it-out nature of the work kind of endears these guys to us. I know personally I was always a big Todd Pratt fan growing up, I don't need to convince anyone around here about Ramon Castro; I even used to like Vance Wilson, believe it or not.

Well perhaps one of the most well-loved backup catchers in Mets history was Gary Carter's understudy back in '86, Ed Hearn. The bespectacled one was everything we love in a backup catcher, strong defensively, tough as nails and a little bit off the wall. Well recently, Rob was lucky enough to speak with Hearn about his time with the Mets, his second career as an extremely successful motivational speaker and the inspirational lessons he's learned through the years, both on and off the field.

To hear that interview click below and to read a little preview of what's in store read on below the break:

Rob C:  Now for me, I'm just 24, and that year [1986], people talk about it like it was the best year ever but for me it's just stories and hearing about it, I never really experienced it.  Can you tell me, was it as wild and crazy as the stories go or has it gotten a little overblown?

Ed Hearn:  No, in fact it was wilder and crazier than the stories you've heard.  It was a team of characters, there's no doubt about it.  On the field, off the field, this team was an absolute one of a kind type of team.  In my opinion, unfortunately, we didn't have the character, we had the characters but i don't think the team had what it took to be a long-term success.  You've got be a unit that plays together on the field but you can't make stupid mistakes off the field.  We'd have a lot of fun, but looking back I think some of those things and some of that fun ended up being the decline of the Mets and here we are, 25 years later, no more World Series'.

Rob: What would you say is your favorite prank from the '86 season?  Did you ever give or receive any of the famed 'hot foots'?

Ed:  Oh yeah.  I paid attention as a rookie and actually carried that over to the Royals after I was traded the following season.  The old Roger McDowell 'hot foot' was definitely a great one but they had a lot of great things.  I remember 'steak fights' on the plane.  Raw meat, steaks.  Daryl Strawberry...people in the bullpen...would attack with steaks.  So all of a sudden, this is not a food fight, this is professional men with rare, uncooked meat flying through an airplane.  You got stuff like that; how can you forget stuff like that?

Let me just thank Mr. Hearn for making some time for us and giving some great insight about the '86 championship team. To learn more about the NephCure Foundation click here.