When my favorite Met Carlos Beltran gave his team a 3-2 lead with a two-run homer in the third inning, I was hopeful that it would be a moment of slight redemption for a man who spent most of the week being unfairly excoriated. Unfortunately, starting pitcher Jenrry Mejia allowed six hits and four runs in the fourth inning, and the Phillies would never relinquish the lead. That would be the last inning of work for Mejia, who hasn't impressed in his two September starts: nine innings, seventeen hits, ten runs, four strikeouts, four walks. I'll agree with Ted Berg, who says that the 20 year-old phenom should start next season in Triple-A, regardless of his performance this final month.

The Mets scored four runs on eight hits against Roy Halladay, who held a 1.88 ERA this season against our heroes entering the game. Josh Thole had three of the hits (all singles) and Ike Davis added two (a single and a double). Mejia also singled against Doc, his first major league hit, and was driven in by a Jose Reyes double to account for the Mets' first run. One other highlight -- Thole threw out Shane Dicktorino trying to steal second base in the third inning. He has terminated nine of 21 attempted base stealers this season (43%, an outstanding percentage), which is surprising because of the negative scouting reports I had read. Speaking of poor defensive reputations, Lucas Duda has been struggling in the field after impressing initially. Witness the Raul Ibanez second inning flyball which Duda turned into a double: 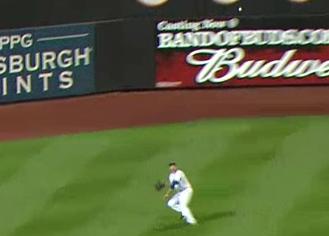 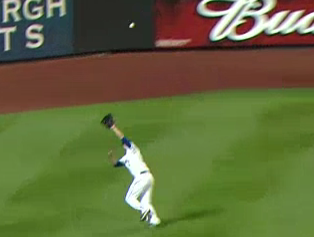 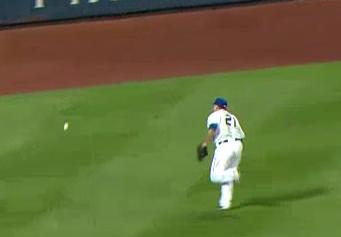 Carlos Ruiz was on base five times to lead the Phillies. Ryan Howard and Chase Utley added home runs. The Braves beat the Cardinals 8-6 tonight, so the Phils maintain their one game lead in the NL East.

Mike Pelfrey faces Kyle Kendrick on Saturday at 4:10 PM. It's the most winnable game of the series, with Roy Oswalt set to start on Sunday.