Mets 8, Pirates 7: We Will Not Go Quietly Into The Night!

Share All sharing options for: Mets 8, Pirates 7: We Will Not Go Quietly Into The Night! 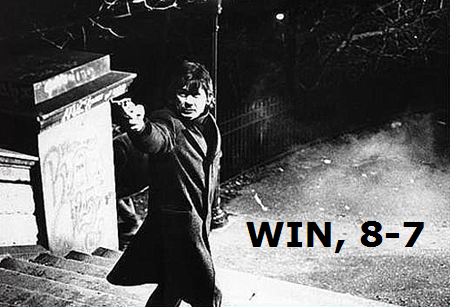 Entertaining game, minus the Jenrry Mejia injury (he left in the third inning with an acute strain in the back of his right shoulder). He will undergo an MRI and we will be sure to relay any updates on the busted pitcher front. After falling behind 5-0 early on, the Mets scored eight runs, including a seven-spot in the bottom of the fourth. Here's how it went down:

Angel Pagan avoided one of the great embarrassments in baseball -- making two outs in an inning. He finished the night 2-for-4 with two RBI. Jose Reyes cracked a solo home run in the sixth inning -- his tenth longball of the season -- to finish the scoring.

Raul Valdes was lit up in relief of Mejia, allowing four runs in 1.2 innings of work. Regardless, he "earned" the win. And as we all know, "in pitching, the only thing that really matters is wins". Good on Raul, then. A slew of relievers were generally effective thereafter. Despite allowing a lead-off home run to Andrew McCutchen in the ninth inning, Hisanori Takahashi converted his seventh save in as many opportunities. Is he a true closer? Does he have that mentality? I need to talk to some old baseball men to find out.

Some other random notes:

That makes three satisfying wins in a row. And a 73-73 record, back to .500. Mike Pelfrey will try to make it a sweep on Thursday night against Charlie Morton, he of the 9.05 ERA. 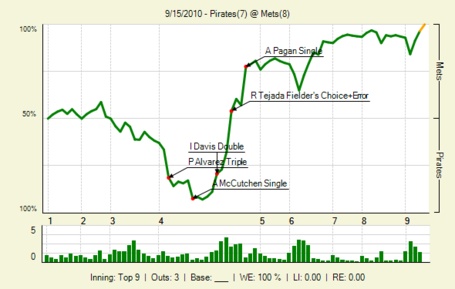