Great news all around -- the Mets swept the four game set with the Pirates and survived the Jerry Bruckheimer movie filming in New York City today: 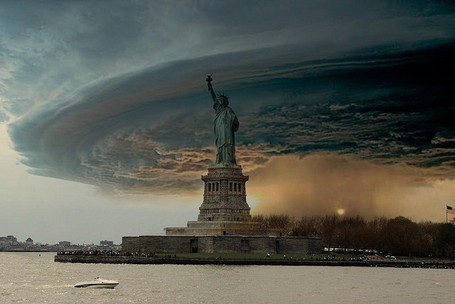 Hat tip to Tommy Bennett for the above media.

Mike Pelfrey pitched seven strong innings, striking out four with three unintentional walks. If you told the average Met fan back in March that Pelf would have a 15-9 W/L record and 3.84 ERA in late September, the response would probably be "CHAMPIONSHIP". That said, he's been basically the same pitcher each of the last three years, per his peripherals, and if he can merely repeat his 2010 in future seasons I would be satisfied. Plus he's only 26, so hopefully there's room for improvement. Also, it's time for an update to Big Pelf's Watch Watch.

Lucas Duda led the offense, going 2-for-4 with a pair of doubles. His two-run in the double in the fourth inning knotted the score at two. His OPS is now up to .333. Baby steps. Pelf singled Duda home two batters later, giving the Mets a 3-2 lead they would never surrender. Angel Pagan went 3-for-5, and was 8-for-17 in the series. He also made a spectacular catch in the fourth inning to rob John Bowker of extra bases. Watch it right here.

The reeling Braves come to town Friday for a weekend series. The game one pitching matchup is Jon Niese vs. Tommy Hanson.

Unintentionally sexual quote of the game: "Well Josh goes the other way naturally" -- Keith Hernandez on Josh Thole's approach at the plate

Compared to the Phillies, the Mets surely pale
When measuring up to the Braves, the Mets fail
When facing the Rockies, the Mets come up short
And Yankees and Rays play a whole different sport
But if you like pleasures that tend toward perverse
Just look at the Pirates; it sure could be worse