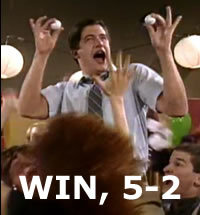 Tonight’s game threatened to be just as dull as yesterday’s and I was desperately searching for something to write about. The Mets offense once again was doing nothing. Dillon Gee was pitching well but but not well enough to make up for it. Nobody really retaliated to make up for Chase Utley’s slide the night before. The first six innings were over in a little over an hour and a half. But then Lucas Duda came to the rescue, knocking in three as the Mets scored five seventh-inning runs en route to a 5-2 victory over the Phillies. The win snapped two streaks: the Phillies’ 11-game winning streak and the Mets’ six-game losing streak. It, alongside the Braves’ victory over the Nationals today, also reduced the likelihood of Met fans having to watch a Phillies celebration on the air tomorrow, as the Phils’ magic number remained stuck on two.

Early on, I didn’t think the Mets had a snowball’s chance in hell of winning the game. Like Friday’s game, Philadelphia drew blood early, this time with a Ryan Howard two-run bomb with two out in the first. But Gee, to his credit, didn’t rattle and immediately struck out Jayson Werth. Those two runs were the only ones Mets pitchers allowed. But despite the solid pitching, that 2-0 lead seemed like a two-mile chasm on Jupiter. The Mets bats haven’t gotten anything going lately, and the same was true through the first six innings tonight. Kyle Kendrick—not exactly Roy Halladay, Roy Oswalt, or Cole Hamels out there—was looking lights out. Mets hitters were swinging early and often again, just as they had against Joe Blanton on Friday. Through six innings, Kendrick hadn’t walked a batter and had only thrown 64 pitches.

That all changed in the seventh. Well, Kendrick was still being efficient, but the Mets did more with it. Carlos Beltran led off the inning with a single. David Wright hit into a fielder’s choice, and Ike Davis singled before Angel Pagan hit a sharp ground ball too first that bounced off Howard’s glove and sailed into right. The bases were then loaded for Josh Thole, who singled sharply to right to bring home the Mets’ first run. The Phillies pulled Kendrick in favor of Chad Durbin, and Jerry Manuel did a little maneuvering of his own, calling on Duda to hit for Ruben Tejada. That’s why Jerry earns the big bucks. And Duda came through, smacking the ball into the left-center gap to clear the bases. and give the Mets a 4-2 lead. After Gee struck out, Jose Reyes doubled home Duda for the Mets’ fifth and final run.

But as nice as it was to see Duda with a big hit, it was just as nice to see Gee excel against a solid Philadelphia lineup. He wasn’t extraordinary—five strikeouts, though a career high, is hardly dominant—but he got ahead of hitters, didn’t walk anyone, and kept his pitch count manageable. It’s certainly the sort of performance that inspires some degree of hope.

The rubber game is tomorrow, as Pat Misch takes on Cole Hamels at 1:35.

Though now among my lesser thrills
It's good to see Mets beat the Phils
Five-run outburst played the Grinch
To the Phillies' home-crowd title clinch
Philly fans will likely brood
And quickly turn to comfort food
And concurrently to booze
And thinking there's a word spelled "Youse"
While word, with Mets in mind, was coined
We'll all enjoy our schadenfreunde 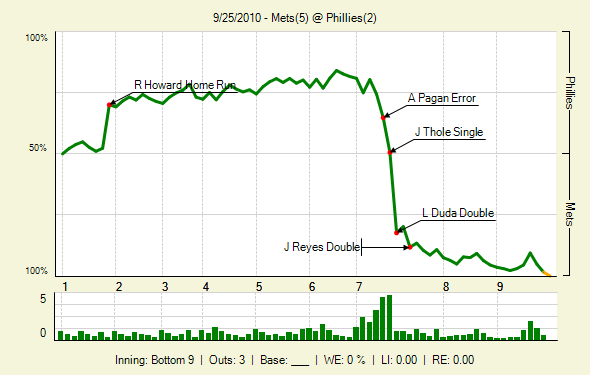